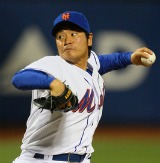 Every time I saw Raul Valdes take the mound, I thought, “how is this guy in the Major Leagues?” His delivery resembles that of a high school shortstop who is thrown into a pitching role because the team has run out of pitchers, and his stuff is marginal at best.

For a while, Valdes seemed to get by – if you judge him by his 1.86 ERA in April. That number is deceiving, however, since during his 9 innings of work in the initial month, he allowed 9 hits (including a homer) and 3 walks, and blew two save opportunities. But something about Valdes (perhaps his smile?) enamored the Mets’ coaching staff, and he hung around for most of the year, finishing with a 4.91 ERA and 1.47 WHIP through 38 games and 58 IP. His one positive was an ability to get batters to swing and miss – he struck out 56 in those 58 innings. However, I will go on a limb and say that was more due to batters not seeing him before rather than advanced ability.

The Mets have already dropped Valdes from their roster, and I don’t see him returning to the organization in 2011. Although the Mets have already lost Hisanori Takahashi, and likely will lose Pedro Feliciano this winter, I don’t see them adding him as a lefty specialist – mainly because he was ineffective against lefthanded hitters (who hit .330 with a .991 OPS against him). He is a nice enough guy and definitely a team player who will fill any role asked of him, but he’s simply not very good. 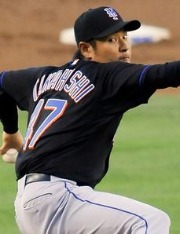 These up-and-coming Mets are quite entertaining!

Pat Misch (I seem to remember him around this time last year) spun 8 brilliant frames and young Josh Thole hit a solo homer in the bottom of the tenth to give the Mets a dramatic walkoff win to beat the last-place Nats.

Misch allowed just one run on 3 hits and one walk, striking out 10 in 8 innings and expending only 109 pitches. For all that, though, Misch remains winless in 2010 — Hisanori Takahashi was awarded with the win after two innings of stellar relief.

Interestingly, that was Takahashi’s 10th win of the season, giving the Mets 4 pitchers with double-digit wins. Now, if I told you in March that the Mets would boast four pitchers with 10 wins apiece, would you have believed that they would have finished with a losing record? Remarkable.

Thole had half of the Mets hits, with two. One of the other hits was Ike Davis’ 19th homer of the season; the other was a single by Angel Pagan.

The second-to-last game of the year occurs on Saturday afternoon at 1:10 PM. Legendary lefty Raul Valdes will face Yunesky Maya in a once-in-a-lifetime matchup not to be missed.

Mike Pelfrey threw ice on the red-hot Houston Astros, Ruben Tejada collected his first hit in 9 days, David Wright drove in his 85th run of the year, and Hisanori Takahashi saved the day as the Mets won the first game of the three-game series and reclaimed their goal of .500 ball.

After a difficult, 31-pitch first frame, Big Pelf settled down and set down the ‘stros through the next seven, allowing no runs on six hits and two walks. Rebounding after that tough first inning fueled his confidence, and he rolled the rest of the way.

However, the win was in jeoporady in the ninth when Bobby Parnell allowed two one-out singles — the second of which included an error by Angel Pagan that put runners on the corners. Rather than let the young fireballer learn to work out of a jam in this meaningless ballgame, Jerry Manuel summoned Takahashi from the bullpen, who allowed an RBI single before getting the final two outs. Yes, the preference is to see the Mets win games, and yes, it would’ve been a damn shame if Pelfrey didn’t earn a victory, but if Parnell isn’t going to be given a chance to find his way out of a mess in that situation, then when will he? Or will he ever? His development is being stunted because Manuel is still managing for his job — not good for the long-term health of the organization.

Speaking of long-term, Tejada not only hit a single to boost his average to .169, but he also drew a bases-loaded walk to drive in what turned out to be the winning run.

Two former Mets were in the game for the Astros: Anderson Hernandez (who is hitting 53 points higher than Tejada, but still dangerously close to the Mendoza Line), and Nelson Figueroa, who was the tough-luck loser in allowing only two runs on three hits in seven innings.

Yes, you got that right — the Mets had only three hits on the night, completely shut down by Nelson Figueroa. Not Ed Figueroa, but Nelson Figueroa. And neither of the runs were scored via a hit — the first run came on a sac fly by Wright.

Closer? Who needs a closer?

The Mets began the After K-Rod Era in fine style, taking a close one from the Astros — and sealing the deal with a save by Hisanori Takahashi.

But see, that’s the difference that sets the great teams like the Mets apart from all the rest: DEPTH. Only a team as deep and talented as the Mets can lose an $11.5M closer and not even blink.

Jonathon Niese threw another gem, but wasn’t around long enough to earn a decision. Niese went a strong 7 innings, allowing one run on 7 hits, walking none, striking out 5.

David Wright broke out of his lengthy slump, going 3-for-4 and scoring the winning run in the ninth when he scampered home from third on a slider that got away.

Carlos Beltran‘s bat also showed signs of life — he had two hits including his second homerun of the season, a solo shot that accounted for the Mets’ first run of the ballgame.

The only other Met to swat an extra-base hit was Jeff Francoeur, whose ninth-inning triple scored Beltran with an insurance run.

When the Mets are playing in the NLDS in October, we will all look back at this game, and the exit of K-Rod, as the turning point of the season — the start of when everything began to go right. Or not.

I am traveling for work this week and couldn’t get the game on MLB.com so wound up listening to the WFAN broadcast of this game via my iPhone MLB GameDay app. I can’t decide what is most annoying about the radio broadast: the “Cars for Kids” ad, the NY Auto Giant ad, or Wayne Hagin. Maybe it’s easier to say that the most annoying thing was that I couldn’t get MLB.com video to work.

The Mets play in Houston again on Tuesday night at 8:05 PM. Johan Santana will face Nelson Figueroa in a matchup of pitchers facing their original organization.

Pat Misch May Start on Saturday 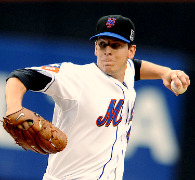 Adam Rubin of ESPN-NY is reporting that Pat Misch was pulled after 55 pitches on Tuesday night and is likely to be promoted to the Mets to make a start on Saturday vs. the Phillies.

This possibility was furthered after Hisanori Takahashi threw a perfect 8th inning vs. the Rockies, prompting Jerry Manuel to announce that Takahashi would not make his Saturday start and instead remain in the bullpen.

On the one hand, it seems strange to move Takahashi out of the rotation after he struck out 10 and allowed only one run in 6 innings vs. the Braves in his last start (July 31). On the other hand, I don’t have confidence in Tak as a starting pitcher over the long haul — I truly believe a large part of his success has been due to hitters not being familiar with him. So, it wouldn’t surprise me to see teams who were befuddled by him in the past, have his number the next time he faces them (i.e., NL East clubs). I don’t know that a setup role is ideal for his repertoire and skill set but the Mets don’t have anyone better to audition in the role.

As for Misch, one has to wonder why it took so long for him to return to the Mets. He pitched more than admirably through seven starts at the tail end of last year, and has been stellar in AAA this season. For a team so desperate for pitching, Misch should’ve been given another shot sooner than this. Maybe the Mets think he’s Nelson Figueroa.

I’m not going to predict a shutout by “Glavine Lite” vs. the Phillies on Saturday, but sending Misch to the mound is not the worst idea in the world. It’s either him or Oliver Perez at this point, right?