HoJo On the Way Out 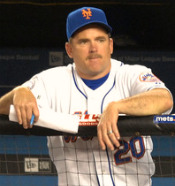 According to sources close to the situation, Howard Johnson will be relieved of his duties as batting coach for the New York Mets.

You may have read or heard Jon Heyman’s report that “there has been no discussion of Howard Johnson” and that Jerry Manuel’s job is “safe”. Kevin Burkhardt is tweeting similar “news”.

However, our sources are reporting quite the opposite.

For one, Johnson’s role was most definitely discussed and almost surely will change. It is possible that he won’t be fired outright — for example, he could be “reassigned” to another area of the organization. Or maybe the Mets will do something like they did in 2008 with Rickey Henderson. Perhaps they’ll hire Darryl Strawberry to teach the players how to swallow fire — who knows? All we know is that HoJo is moving on and Jerry Manuel is about as “safe” as Toyota gas pedal — though he’ll likely remain the manager for at least a few more days.

My guess is that the Mets are still trying to figure out the best way to break the news without upsetting fans of the ’86 Mets and David Wright, and waiting for the “right moment”. Or, maybe our sources are completely wrong.

Regardless of HoJo’s status, the Mets HAVE TO do something — they’ve forced themselves into making a change for the sake of change, at the very least.

*** UPDATE ***
Just got word that Jerry Manuel’s job IS safe for the time being. Though, the Mets have been on the fence before regarding Manuel, and could change their mind again at the drop of a hat.

HoJo is still the focus of whatever “change” is made, however.

Back Can the Mets Afford to NOT Make a Change?
Next HoJo is Safe !