Why the Love for John Ricco? 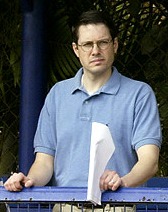 Quick: find a Yankees fan and ask him/her who the Yanks’ assistant GM is. No idea? Huh. (BTW, we’ve played this game before.)

Now, as a Mets fan, I bet you know who the current Mets assistant GM is; it’s the same person who was the assistant to previous GM Omar Minaya — John Ricco.

Interesting, isn’t it, that few know about the assistant GM for MLB’s most successful organization, yet many are aware of the person in the same role for one of MLB’s most disappointing clubs?

Despite the futility, we’ve been hearing for the last few years about Ricco, and how he is an up-and-comer and a future GM — possibly a future GM of the Mets. What this hype is based on, nobody knows, though at least some of it is rumored to be based on a photo of him with a calculator.

First things first: I have nothing against John Ricco, mainly because I know absolutely nothing about him. Unless you want to count the random media and blogosphere tidbits about him being “highly regarded” by “high ranking officials”.

As Greg Prince pointed out recently, MLB GMs don’t have baseball cards, and as a result we as fans really have no clue on how “good” or “bad” any GM — or aspiring GM — is. All we really have to go on are the remarks uttered by anonymous sources — the ubiquitous people “close to the situation” and “high ranking officials within the Mets organization”.

You know what? Those same people kept telling us what a great manager Manny Acta (a.k.a., “Connie Macta”) would be some day. His teams in DC went downhill after taking over for Frank Robinson, and his Indians team seems to be on a similar downward spiral. Could just be a coincidence of bad luck, though. As another example, those “high ranking officials” are the same folks who gave Omar Minaya the keys to the castle and made Tony Bernazard a thought leader. So excuse me if I’m hesitant to trust these “officials”.

Since his work is done behind the scenes, we don’t really know much about Ricco’s job and even less about his performance. All we can look at are the actions and the results. For example, he assisted Omar Minaya, and one of his responsibilities was to help with the contracts and arbitration cases. Presumably that means he was somewhat involved with the negotiation and execution of contracts with, for example, Oliver Perez, Luis Castillo, Alex Cora, Jason Bay, Kelvim Escobar, and Ryota Igarashi. We can also assume he had something to do with the decisions of going to arbitration with (rather than non-tendering) the likes of John Maine, Jeff Francoeur, and Sean Green. Nothing much to boast about there.

Speaking of Francoeur, it was Ricco who was praised for being the driving force behind acquiring him from the Braves. How short memory can serve, eh? Again, not exactly something to highlight on the resume — and not something to brag about to a sabermetric-minded analyst.

Yet, despite being a key part of the shenanigans of the Omar Minaya era from the past five years, Ricco is still seen as a “keeper”, and one who could be “groomed” into the GM position by a tutor such as Sandy Alderson. Maybe he is as great as everyone says — I really don’t know. All I know is what I see, and, to quote Bachman Turner Overdrive, I “ain’t seen nuthin’ yet”.

If the organization is to succeed, the next Mets GM needs to have the authority to choose his/her own team — that includes his immediate associates and underlings, the scouting department, the field manager, etc. Maybe that team will include Ricco, maybe it won’t. But let’s not get ahead of ourselves and possibly deluded into thinking John Ricco is the next Theo Epstein or Jon Daniels, just because the Mets’ hype machine says so. Let’s leave it to the soon-to-be-named GM to make that decision, and watch what transpires over the next few years.

Back Off-Topic: A Matchup Not To Be Missed
Next Review of 2010 Predictions