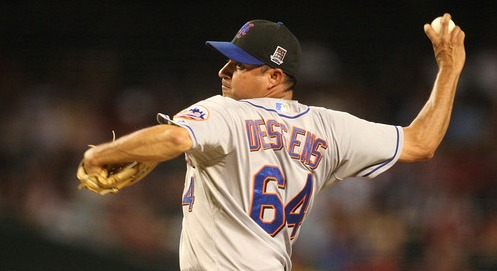 Every time I want to write off Elmer Dessens, he comes back and disproves my assertion that he stinks. Still, I maintain that he does not have the talent to pitch in the big leagues, and his incredible stat line must have something to do with either voo-doo or a pact with the devil; there is no other way to explain how someone with such pedestrian stuff can post a 2.30 ERA and 1.21 WHIP in 53 games.

Much if not all of his success has to do with throwing strikes – he walked only 14 in 47 innings. The way he was used also helped – generally speaking, he either faced one or two batters, or was brought in for mop-up duty. In other words, a combination of lack of exposure and appearing in meaningless games.

I wouldn’t want to negotiate a contract with Dessens after he put up those numbers. Despite the fact he had a similarly strong half-season with the Mets in 2009, I do not believe he can keep it up, and am willing to gamble that he falls back to Earth in 2011. Let him walk.

Click here to read the 2009 Analysis of Elmer Dessens

Back 2010 Analysis: Manny Acosta
Next Why Bobby Valentine Won’t Be the Next Mets Manager