Why Bobby Valentine Won’t Be the Next Mets Manager 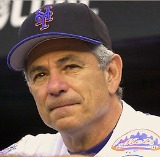 Ever since Willie Randolph was fired — and probably even before — there has been a groundswell supporting the return of Bobby Valentine to Flushing as manager of the futiles.

As time goes on, the legend of Bobby spreads further and grows larger — to the point where many Mets fans have reached a point where any other choice for manager seems illogical.

Ah, how the passage of time clouds memories, heals wounds, and distorts reality.

Last week, Darin at Amazin’ Avenue asked the question — why are Mets fans obsessed with Bobby Valentine? The author asks a good question, citing Valentine’s so-so career record, overactive ego, and sometimes inappropriate press relations. Oh, you forgot about that last part? Try to remember — while many people have listed “knows how to deal with the NYC press” as a feather in Valentine’s cap, the truth is, he was far from a media darling at the tail end of his tenure with the Mets (a media whore, yes, but darling … not quite). Fans conveniently forget (or are too young to remember) Valentine’s critical comments in a speech to the Wharton School of Business; the outright lies he told and the odd jokes he made after the marijuana fiasco; and the public feuds he had in the newspapers with players such as Rickey Henderson, Bobby Bonilla, Peter Harnisch, Todd Hundley, Al Leiter, and Edgardo Alfonzo (among others). Oh? you forgot that Bobby V. publicly criticized fan favorite Alfonzo for focusing too much on his next contract, rather than his on-field performance?

But, it is understood why Mets fans are so obsessed with Bobby V., and have these convienent memory lapses. Valentine was, after all, the last manager to take the Mets into the World Series — and he did it with a team that had no business getting that far. For one season, Valentine pushed all the right buttons, rarely making a mistake with his often overzealous in-game tactics and getting players like Benny Agbayani, Glendon Rusch, Todd Pratt, and Timo Perez to play well above their heads. He had personality, a great smile, a sense of humor, and was honored several times for his charitable contributions — in other words, someone who was hard not to like.

Unfortunately, and despite his possibly unjustified popularity, there’s little to no chance he’ll ever manage the Mets again. Reason one is his price tag; the Mets will not pay top-dollar for a manager, even if that manager could result in a boost in ticket sales. Reason two is the same reason he was fired almost ten years ago: control. The straw that broke the camel’s back in 2002 was Valentine’s request to be more involved in personnel decisions. Such involvement is taboo in Sandy Alderson’s grand plan, who deems field managers as glorified sock puppets, whose job is to faithfully carry out orders sanctioned from above.

To further burst your Bobby-loving bubble, the truth is, Valentine likely wouldn’t be as effective today as he was at the turn of the century. Some of the “out of the box” strategies he applied back then are blase now — such as incessant matchups based on stats and established bullpen roles. Additionally, there was a much different dynamic in upper management during Bobby V’s time — specifically, Fred Wilpon was calling the shots. It is now the Jeff Wilpon Era, and things have changed in the way decisions are made; ironically, Valentine might have had more freedom and influence back then than he’d ever have a chance to get now.

Perhaps most significantly, Bobby Valentine — like all of us — is eight years older; he’ll turn 61 next May. Youth was one of Valentine’s assets in the 20th century; players and fans fed off his energy, and his reasonable proximity in age to the players he managed seemed to add to his appeal. He’s an old guy now, who may or may not still have that youthful exuberance, and who may not identify as well with modern ballplayers as he did a decade ago.

That doesn’t mean I wouldn’t like to see Bobby Valentine manage again — I would. Whether it’s for the Mets or elsewhere, I would like to see if he still has that energy, if he still shows that flair for being serious while not taking things too seriously. It would be fun to see his mind work out today’s game and motivate today’s players, perhaps inventing new strategies (or ways to disguise himself from umpires).

However, if Valentine returns to an MLB dugout, it won’t be in Flushing — though who knows, it could be in New York.