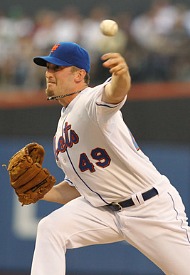 Young lefthander Jonathon Niese made great strides in 2010, emerging as a capable MLB pitcher with mental toughness and competitive fire.

His final numbers didn’t fully tell the story; he posted a 9-10 record with a 4.20 ERA, 148 Ks, 64 BB, and 192 hits in 30 starts covering 173 innings – pretty ho-hum and not necessarily indicative of a star on the rise. But in truth, Niese probably wasn’t ready to pitch a full season at the MLB level after missing the second half of 2009 and winter ball with a torn hamstring.

At times, Niese was spectacular – for example, his one-hit shutout of the Padres in Game 60. At other times, he looked overmatched, struggling to find the strike zone and getting hit hard when he did. Over the course of the season, his performance was uneven, mainly due to his occasional overuse of the cutter (which is actually a slider), which in turn was partially the cause for inconsistency with his mechanics and arm angle.

Niese’s fastball didn’t have enough movement to rely on heavily against MLB hitters, so the “quick fix” was to learn a cutter. On the surface, it was a decent idea, and the pitch did give batters another pitch to think about – and it was often useful as a strikeout pitch. However, the reason it was useful as a swing-and-miss pitch was because Niese’s “cutter” usually evolved into a “slider” – a pitch with considerably more break, particularly downward. Obviously, getting swings and misses is a good thing for a pitcher, but the problem with Niese’s execution of the pitch was that he tended to drop his arm angle and throw all of his pitches on a flatter plane – including his curveball.

Before 2010, Niese’s key to the big leagues was his overhand, 12-6 curve – an often nasty and nearly unhittable pitch that he was learning to throw in the strike zone. After learning the cutter/slider, and in turn dropping arm angle, Niese’s curve lost its bite and consistency. Additionally, his fastball flattened, which in turn caused him to rely more heavily on the cutter – a difficult cycle to break.

Still, Niese pitched well for stretches, especially during a 14-start stretch from early June through mid-August, when he finished 7 innings or more nine times. During that time, he pitched with noticeable confidence, perhaps induced by his near perfect game on June 10. Unfortunately, he faded fast from there through the end of the year, posting a 4.43 ERA / 1.40 WHIP for the month of August and a 7.11 ERA / 1.97 WHIP in September. Over his \last 10 starts, Niese was visibly worn – physically and mentally – and also showed a slight drop in confidence. Everyone watching could see that Niese was tired — except manager Jerry Manuel and pitching coach Dan Warthen.

When Niese was in the midst of his June-August run, I considered him a #3 starter. After his late-season slide, I’m not so sure. On the one hand, I do believe sincerely that his struggles down the stretch were in part due to fatigue. However, the fatigue led to further deterioration of his mechanics, and I don’t know how easy it will be for him to recover. Niese is at a point in his career where he can focus on repeating good form and establish consistency, which will lead to success. But at the same time, he can also very easily ingrain bad habits. Which way he goes will depend somewhat – if not significantly – on the guidance he is given (i.e., the pitching coach).

I believe that Niese has immeasurable, unteachable assets; specifically, unrelenting determination and fierce competitiveness. He is a tough kid who, when confident, is unflappable and believes he is better than his skill set. In fact, I believe he is something of an overachiever, considering that beyond his occasionally nasty curve, his stuff is average. What does that mean for 2011? Hard to say; much depends on what the Mets pitching coach – be it Dan Warthen or someone else – makes a priority for Niese. If it is focusing on rediscovering the deuce and repeating mechanics, then Niese should make steps forward. But if it is to continue doing the same things he did in 2010, then we won’t see a significant improvement. Though, that wouldn’t be the worst thing – if Niese can replicate what he did in ’10, he’ll be at worst a solid #4 or #5 starter with innings-eating potential – and that’s not bad at all.

Click here to read the 2009 Analysis of Jon Niese