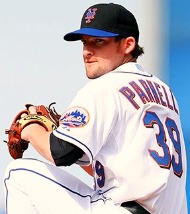 Back 2010 Analysis: Jon Niese
Next Melvin and Jauss Begin the Proceedings