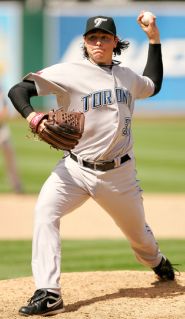 There has been some buzz here and there around the Mets blogosphere that Scott Downs should be a target for General Anderson. Certainly, the team will need some help in the bullpen, especially if Pedro Feliciano finds employment elsewhere — as it appears is likely to be the case.

But I don’t think Downs makes any sense, despite the fact he is a proven lefthanded reliever with the ability to retire both lefties and righties.

First, you have to consider his age — he’ll be 35 years old before Opening Day, folks. That’s right, it’s not a misprint; Downs was born on St. Paddy’s Day in 1976. Just because you never heard of him before two years ago doesn’t mean he’s only a few years out of the minors. His advanced age alone is reason enough for the Mets to steer clear — particularly since this team will be in a rebuilding phase through the next two years. By the time the team is ready to contend, Downs will be in his late 30s.

Second, even if the Mets were interested, they can’t afford him. A lefthander who retires RHs and LHs with equal aplomb, allows less than a baserunner an inning, and rarely gives up gopher balls, doesn’t come cheap. Downs’ agent will present the recent signing of Joaquin Benoit to a 3-year, $16.5M deal as a relevant comp. Benoit, by the way, is only a year younger than Downs. Considering that Sandy Alderson has about $5M to play with on free agents this winter, my guess is he won’t want to blow the whole load on one individual. Chances are, the bidding will start at $5M per year — if not more — and deeper pockets such as the Yankees, Rangers, Angels, and Phillies could all be in play for his services.

Finally, there is history to consider. Do you remember the last time the Mets shelled out over $10M on a 3-year deal for a thirty-something lefthanded reliever coming off a career year? It didn’t work out so well.

Scott Downs would be a nice piece to a championship puzzle, but that’s not the puzzle the Mets are working on in 2011.