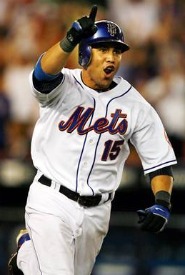 It’s hard to evaluate Beltran’s 2010 season, since he only appeared in 64 ballgames, and the first 30 or so could have been considered “spring training games”.

Beltran was not ready to play minor league baseball when he returned to MLB just after the All-Star Exhibition, but Omar Minaya and Jerry Manuel were desperate to retain their jobs (a running theme through these evaluations) and the Wilpons were desperate to sell tickets, so they activated Beltran anyway and hoped for a miracle. As it was, the Mets season went into an unrecoverable tailspin at almost the same time Beltran returned, making it seem as though the centerfielder was somehow responsible for the downturn. In truth, Beltran probably had nothing to do with the Mets misfortunes, but he symbolized the reason for them: desperation, unpreparedness, lack of depth, and a plan based on hopes and wishes.

Beltran enters his walk year – the last of a 7-year, $119M contract (boy, time flies!). He will be paid $18.5M to hobble around the outfield on a bum knee but hopefully regain some of the offensive force that he flashed in the last 2-3 weeks of the 2010 season. His lack of mobility and speed significantly impacted his defensive skills in centerfield, so the hope is that he’ll be open and willing to move to a corner. One would guess that less running around in the outfield would help him be more fresh in the batter’s box and on the basepaths. Considering the excellent job Angel Pagan did in center for half of 2010, neither the Mets nor Beltran would be hurt by such a move. Beltran will be playing for a new multi-year, multi-million-dollar contract, so motivation will not be an issue, and he’d be smart to swallow his pride, move to RF, and focus on offense — teams pay more for hitting than they do for fielding.

My guess is that if the Mets don’t trade him over the winter, Beltran will come back strong in 2011, and likely be dealt to a contender at the trade deadline. If history is any indication, it could be the best thing that happens to him – and hopefully, the Mets.