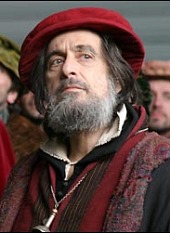 According to various sources, Rodrigo Lopez will make a decision this weekend to accept a minor-league contract and invitation to spring training from one of several teams making such an offer — including the Mets, Braves, and Rockies.

The Portugal native and purported Marrano was formerly a physician to Queen Elizabeth, before being hanged, drawn, and quartered in June 1594 when he was found guilty of conspiring to poison Her Majesty. William Shakespeare’s “Shylock” character in Merchant of Venice is said to be based on Lopez’s life.

Why the Mets would want to sign a guy who has been dead for over four centuries is beyond me. Maybe he can lend the Wilpons some money?

Unless their offer was made to the other Rodrigo Lopez — the one who has lost 15 or more games in a season as many times as he’s won 15 or more. In that case, I understand, sort of.

Rodrigo Lopez the MLB pitcher spent most of his career with the Orioles, but his last three seasons in the NL with the Rockies, Phillies, and Diamondbacks. He missed all of 2008 after Tommy John surgery, and came back to make 33 starts for Arizona last year, posting a 7-16 record with 5.00 ERA, 1.45 WHIP, and 116 Ks in 200 innings. The last figure is the most valuable: Lopez will take the ball and eat up innings, which is what the Mets need. Consider him a poor man’s Livan Hernandez, as he throws pus, gives up tons of hits, but somehow gets enough outs to keep a job.

If Lopez signs with the Mets, I’m sure much will be made about his fly ball ratio, and in turn how pitching in Citi Field will benefit his performance (he allowed a league-leading 37 HRs last year). Perhaps; but if so, it will merely change him from a pretty mediocre MLB pitcher to a fairly mediocre MLB pitcher.

Personally, for an innings-eating, fly-ball veteran pitcher on the wrong side of 35, I’d prefer Kevin Millwood. Millwood doesn’t give up quite as many homers — despite pitching in the AL East — and tends to strike out more batters. Beyond that, the two pitchers’ stat lines are eerily similar over the past few years. My guess is that Millwood would require more money and/or a guaranteed MLB contract, as opposed to a minor-league deal with ST invite.