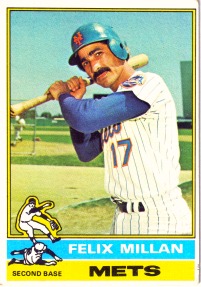 Why, who were you thinking?

Oh, right, Keith Hernandez fits all of those characteristics … and was a much better all-around ballplayer. Keith also was one of the key players to turn around the franchise in the early 1980s and the unofficial captain of the ’86 World Series team. But, I had to choose Felix Millan, because I remember him so vividly for his scrappy play, bunting ability, and, of course, the fact that he choked up so high on the bat.

“Choking up” is something you don’t see very often in MLB these days — if at all. It’s so rare that there are times during my baseball lessons that I suggest to a teenager “hey, try choking up a few inches” and he looks at me like a deer in headlights, because he has absolutely no idea what I’m talking about. For those who don’t know, “choking up” is taking a batting grip with your hands a few inches above the knob of the bat (rather than holding the bat at the very end, with your bottom hand touching the knob). One would “choke up” in order to gain a little more control of the lumber — it’s all about leverage, and the concept of lever / fulcrum. In my generation, every kid was taught to “choke up” if the bat felt too heavy or too long; we were also taught to “choke up” when there were two strikes (or if the pitcher threw serious heat) to give yourself more bat control and maybe a hint more bat speed. The first time I was taught to choke up, the coach said, “just like Felix Millan does” and instantly I knew what he was talking about; Millan literally choked up almost to the trademark of the bat, which was a little ridiculous but it worked for him. To this day, whenever I hear someone say “choke up”, an image of Millan appears in my head — and probably will to my dying day.

It’s probably a dumb reason to honor him with the 17th Day Until Pitchers And Catchers Report, but as mentioned previously, this countdown has nothing to do with logic or the “best” players who wore Mets uniforms.

Which #17 do you choose to represent this day, and why? Post your memories in the comments.

Back 18 DUPACR: Darryl Strawberry
Next Mets Make Offer To Shylock