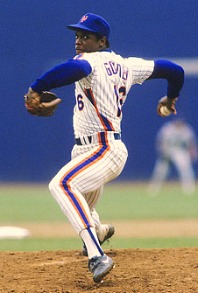 With 16 Days Until Pitchers And Catchers Report, we honor the day with former #16 Dwight Gooden. This was a fairly easy choice, though I did for a moment consider Lee Mazzilli, who made the number famous in Flushing in the 1970s and early 1980s. If you weren’t around back then, you might think it preposterous to consider “Maz” — but back then he was the closest thing the Mets had to a star (and matinee idol, believe it or not). Mazzilli was annually the Mets’ lone All-Star representative and usually the only guy in the lineup hitting over .250. Plus he had a great baseball name.

Funny, in high school (1984-88) I used to wear a gray #16 “Property of New York Mets Baseball Club” t-shirt under my football and baseball game jerseys for good luck. People used to think the #16 was for Gooden, but it was actually for Mazzilli — a too-large gift for my 11th birthday. The timing for when I finally grew into it was impeccable.

But I digress … this is about Duh-wight (as Ralph Kiner used to say), who electrified Shea Stadium with the lightning bolts that screamed from his right arm.

Like Darryl Strawberry, we knew Dwight was a superstar the moment he stepped on the field. It was hard to separate the two in our heads — if you thought of Dwight, you thought of Darryl, and vice-versa. Ironically, this is the way it went for most of each of their roller-coaster careers.

Dwight and Darryl were supposed to make the Mets a “dynasty” — something the Yankees were called in the late 70s — leading the team into the World Series every year for the next 10-15 years. Darryl was going to some day break both the single-season and career homerun records, and might even win the Triple Crown. Dwight was going to pitch the first no-hitter in Mets history — we were sure of it! — and win 300 games easily. In their early 20s, they were sure-fire Hall of Famers — barring injury or some other incredibly unfortunate mishap.

But we won’t go there; we know how things turned out. As with Darryl, no matter what turns “Doc” took off the road to greatness, I still vividly remember that greatness, and cherish it — however brief it was.

For three years — 1984-1986 — Dwight Gooden was the best pitcher in baseball, hands-down. He accomplished this status while being too young to drink (legally), which when you think about it, is all the more amazing. Starting from a violent, intimidating, high knee lift and hip coil, he threw a blazing, 96-98 MPH fastball that moved laterally and vertically; an overhand curveball with such tight spin and sudden drop it was deemed “Lord Charles” (curves were called “Uncle Charley” in the old days); a wicked slider that dashed furiously away from waving lumber; and just for fun, he’d toy with a change-up that he didn’t even need. Dwight was so dominant, it didn’t seem fair that batters had to face him — particularly at night, when his fastball seemed to speed up just a bit more, and his curve dropped a little harder.

That curve was something else. Nolan Ryan was the only other pitcher I ever saw with a curve like that, but he didn’t have the same control of it, and it didn’t drop as dramatically. Doc’s deuce would seem to start two feet over the batter’s head, then dart straight down into the strike zone at his buckling knees. With the image of the yellow hammer now firmly entrenched in the batter’s head, Dwight would follow up with a rising fastball that started toward the strike zone at a level near the batter’s belt buckle, and wind up at shoulder height — past the breeze of a too-slow bat.

What was nearly as unbelievable as Gooden’s talent was the fact he didn’t throw a no-no in a Mets uniform. With his dominating stuff, a no-hitter seemed inevitable every time he made a start. How anyone ever made contact remains a mystery to me.

What are your memories of #16? And are they of Gooden, Mazzilli, or someone else? Share in the comments.

Back Mets Make Offer To Shylock
Next 15 DUPACR: Jerry Grote