Update On The Animal 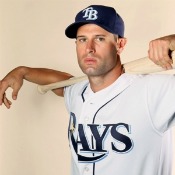 From the “Where They Are Now” files ….

Kevin Kernan of the NY Post has a nice article on Chris Carter, who is now in Tampa Bay.

When “The Animal” first signed with the Rays, it seemed like an idea landing spot, since the team seemed to be sparse in terms of DH / 1B / OF depth. At the time, it appeared as though Carter would get a legitimate shot to make the big club. Of course, that was before the Rays signed Manny Ramirez and Johnny Damon. Carter still is being given an opportunity to make the team, but his chances appear to be somewhere between slim and none.

Still, his attitude remains the same — happy to be in baseball. In addition to changing teams, Carter also got married over the winter (sorry, Erica!), tying the knot with a woman he met during his days in the Cape Cod League. He relayed to Kernan that he was surprised when the Mets released him, but had some very nice things to say about his time in New York.

“Once I found out it wasn’t going to be the Mets, I said, ‘OK.’ I just started working hard. I didn’t expect it to happen. I loved playing for the Mets. I was surprised by it. It was completely unexpected. I didn’t hear any rumors, but I didn’t want to dwell on it too long. I had to move forward because I didn’t have any plans.”

“Every time I think about it, I smile,” he said. “It was the best time of my life being with the Mets. I felt a part of that Mets spirit. It was really special. Shoot, they deserve to win a World Series. Hopefully it’s not while I’m playing because I’m with the Rays right now, but they’re amazing. And I really miss the Mets fans.”

Class act. I miss him even more, now — even if he does throw like a girl.

Back Nick Evans Fans May Get Their Wish
Next What If the Mets Rebuilt in 2008?