But the planets must have aligned with the moons or something this past weekend, because for once, the Yankees looked like fools and the Mets geniuses — perhaps it is a sign of things to come?

In case you missed it, Yankees GM Brian Cashman had this to say about his LOOGY Pedro Feliciano, who was recently placed on the DL with a strained rotator cuff:

“He was abused,” Cashman said. “It’s a thin market when you’re looking for lefties, and he’s one of the better ones out there. But you don’t typically go after a guy who’s been used like that.

“The use pattern was abusive.” 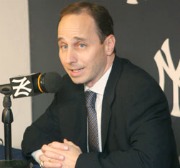 "In answer to your question regarding Feliciano ... yes, I AM an idiot"

Um, yeah, he was. We called him “Perpetual Pedro” and “Everyday Pedro”, among other things, because he pitched, well, perpetually … like, almost every day. As was pointed out on this site last fall, Feliciano appeared in 92 games in 2010, with 43 of those appearances coming on back-to-back days. We wondered if Feliciano was overused several times during the season. Frankly, I was stunned not to see Feliciano’s arm fly off late last summer.

Unfortunately, the Yankees spend all of their extra dough on player contracts, so they don’t have enough to pay for extravagances like an interwebs connection. As a result, Cashman was unable to fire up one of those computer-thingys that all the kids are using these days to “google search” the number of games Feliciano appeared in last year (and 2009, 2008, 2007, etc.). A mystery, really, that NOT ONE of Cashman’s interns has a New York Public Library card — because from what I understand, the NYPL has a few kah-pew-ters that are hooked up to the information highway, for free! Though, I guess it’s possible that google (and ESPN, and MLB.com, and Baseball-Reference, and the other 25,000 websites that display MLB stats) is blocked by the library’s firewall.

Because if only Brian Cashman KNEW that Feliciano appeared in 344 games over the last 4 years, he would have never made that trade with the Mets to get him.

Oh wait, it wasn’t a trade, was it? Boy, it’s hard to remember things as you get older. Turns out the Yankees signed Feliciano as a free agent. So, it’s … um … their own problem if he has physical problems.

(By the way, these are the same Yankees that allowed Joe Torre to make Scott Proctor the poster boy for bullpen abuse … as astutely pointed out by MetsToday reader “wohjr” in the comments recently.)

In response to Cashman’s remarks, Mets pitching coach Dan Warthen had this to say:

“[The Yankees] didn’t know that when they signed him? … He volunteered for the baseball every day. He was asked whether he was able to pitch. He said ‘yes’ every day — every day — and wanted to pitch more than we even pitched him.”

“I feel badly that [Cashman] feels that way,” Warthen added. “That was part of the reason we decided to not re-sign [Feliciano] — because we knew we had used him 270-some times in the last three years.”

Huh … so the Mets factored in their own abuse of Feliciano when considering whether or not to re-sign him. And the Yankees glazed over it.

Perhaps times are changing in New York … it feels like 1983 all over again.

Back The Good and the Bad Through Three Games
Next Inside Look: Phillies