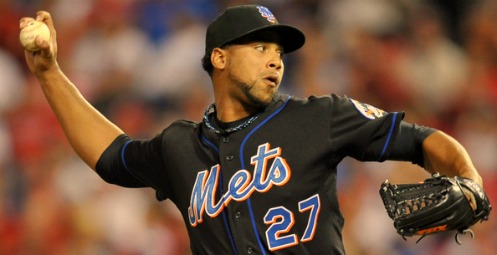 There are 7 days — one week — before pitchers and Molinas report to spring training. And so we examine Mets question #7 of the spring: what will become of Pedro Beato?

As a Rule 5 pick, the Mets were forced to keep Beato on their 25-man roster all season, or offer him back to the Orioles. However, the Mets were never really “forced”, as Beato pitched as well as anyone could have expected and he became an important contributor out of the bullpen.

However, the Mets do not “have to” keep him on the 25-man roster in 2012, and there was some buzz late last season about returning Pedro Beato to a starting role.

After what he showed last year, it’s clear that Beato can be a decent middle reliever in a Major League bullpen, and possibly develop into a 7th- or 8th-inning guy — though probably not a closer. On the other hand, he has four “plus” pitches — four-seam fastball, sinker, change-up, and curveball — which is enough of a repertoire for a starter. Though he didn’t exactly find stardom as a starter in his minor league career, it’s possible that he’s matured, and/or just needed a change of scenery to “figure it out”. At age 25, he’s not necessarily too old to spend a year in AAA to further hone his skills with the long-range goal of joining the Mets starting rotation.

So the question this spring is, will the Mets go forward with the Beato-as-starter experiment? Or will they ultimately decide that he has more value as a reliever?

Further, if he does go into spring training as a starter, will he have a legitimate opportunity to win a spot in the 2012 rotation? It’s not completely unrealistic to believe he could grab a spot with a strong performance and/or something going wrong with one of the presumed starters.

If it were up to me, I’d go ahead with the idea of making him a starter, and stick with it at least through June — be it in Buffalo, Binghamton, or Flushing. I think this should be the plan even if he’s good enough to be in the Mets bullpen, because in my mind there is more long-term potential for him as a starter, combined with the fact that the Mets have little starting depth in the upper minors. In my opinion, it’s easier to find a decent middle reliever than it is to find a decent starter.

What do you think? Will Pedro Beato spend his time “stretching out” for starting duty, and if he does, is that what you think he should be doing? Does it make sense to send him to AAA to convert to starting, even if it appears he’s one of the best options for the bullpen? Why or why not? Explain in the comments.