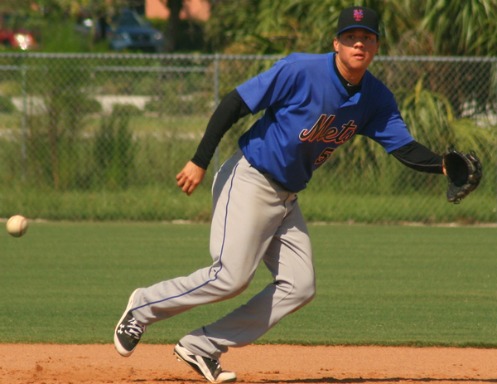 With six days left before pitchers and Molinas report, let’s look at question #6 to be answered in Port St. Lucie this spring: what will become of Wilmer Flores?

As a teenage phenom in the lower levels of the Mets farm system, Wilmer Flores was loosely compared to a young Miguel Cabrera. Now 20 years old, Flores hasn’t yet developed the offensive prowess many are hoping to see, and his body is thickening into a figure that some feel is ill-suited to his shortstop position. Though he’s still young, in some ways 2012 could be a turning point in Flores’ career — and it may be tied to where on the diamond he winds up.

Although he may eventually find his way to a corner position, I’m inclined to see Wilmer Flores play another season at shortstop. He’s listed at 6’3″, 180 lbs. though he may be a half-inch taller and weigh at least 20 pounds heavier. Even if his body evolves into something like 6’4″, 210-220 lbs., that doesn’t necessarily preclude him from playing shortstop — after all, that’s about the size of Troy Tulowitzki and Cal Ripken, Jr., among other big-framed middle infielders. Since he still appears to be physically maturing, there’s a possibility that Flores’ footwork and agility need to “catch up” to his growth spurt. Even if he turns out to be a lumbering infielder with poor range, Flores will learn more playing a full year at shortstop than at any other position — other than maybe catcher, but that doesn’t appear to be an option for him. The skills Flores hones at shortstop are easily transferable to any of the other three infield positions. Now, if the consensus is that he’ll wind up in the outfield, it might make sense to start sending him out there now — but I’d still like to see him taking grounders.

What I think, though, doesn’t matter much. Where will the Mets place Flores this spring? Will they keep him at shortstop? Might they move him over to a corner infield spot, or slide him to second base? Will the Mets have him shagging flies in the outfield? Where would YOU put him this spring? Post your thoughts in the comments.

Back Mets Outfield: What’s Next?
Next Blog Roundup: Mets Prospectus