Why Are Mets Hot On Chris Young? 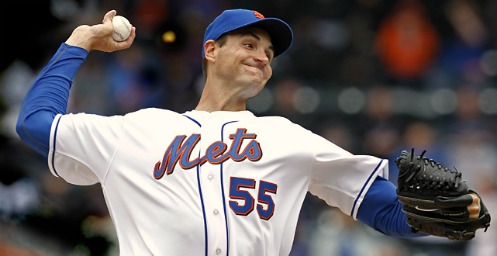 For the last few weeks, a recurring rumor keeps coming up that relates to the Mets’ interest in signing pitcher Chris Young. Is anyone else besides me wondering why?

First of all, as you know, Chris Young underwent season-ending shoulder surgery last May to repair a torn anterior capsule. That is a similar surgery to the one that Johan Santana received to repair HIS torn anterior capsule. It is not the type of injury that pitchers return from quickly — if they return at all. At minimum it takes a full year to get back on a mound to throw a bullpen session. In reality, it usually takes closer to 18 months to get to that point. Even then, it’s rare.

There are reports — likely emanating from Young’s agent and/or hired PR gun — that Young is “recovering nicely” and “feeling great“. I’ve also read somewhere that he’s long tossing close to 200 feet, as if that matters.

Here’s the truth: it’s unlikely Young will return at all this year. Even if he does, why would the Mets care? They’re going nowhere fast, and the soon-to-be 33-year-old doesn’t fit into the plans of a rebuilding ballclub. Further, the apparent stumbling block to a deal is that Young is insisting on a Major League contract — which to me is laughable. The guy pitched in exactly four glorious ballgames last year, and in only four games in 2010, and in only 14 games in 2009. That’s 22 games in three years, and he wants a guaranteed deal — coming off of the riskiest surgery a pitcher can undergo? Seriously? Fine — let him sign with San Diego, and best of luck.

Even if by some minor miracle Young is able to throw off of a mound within the next six months, he’s virtually guaranteed to suffer a setback due to his horrendous and dangerous pitching mechanics. It’s not “bad luck” that Young has spent the majority of his MLB career on the DL with myriad back and arm injuries — it’s because he has a pitching motion that is incredibly unnatural and attempts to defy the laws of physics. Which is interesting, considering that Young is an Ivy Leaguer and therefore should know something about what that guy Newton was spewing about after the apple fell on his head. It was Albert Einstein who defined insanity as “doing the same thing over and over and expecting different results;” in Young’s case, he continued to use the same dangerous mechanics over and over — even after multiple injuries — and expected to remain healthy.

My guess is that Young still hasn’t changed his mechanics one iota, and if that’s true, he’s virtually guaranteed to have a setback, since it was his awful form that caused the torn shoulder in the first place. Long tossing will only accelerate the progress — though in his mind he likely thinks it will get him on a mind sooner. This isn’t my opinion — it’s science (which is a subject that most of organized baseball has yet to discover).

Bottom line is that the Mets would be foolish to sign Chris Young this year, even on an incentive-laden deal. The budget is so slim, it makes no sense to spend any amount of money on someone who is more or less guaranteed not to make a contribution in 2012. Even a MLB-minimum salary is too much; I’d much rather see the team use that money on someone who is able-bodied, and better yet, a player who is under 30 and might have a few years ahead of him. Finally, if the Mets sign Young now, I don’t understand the rush. Why not wait to see him pitch off a mound, at the very least? Why not hold on to that dough in case someone else becomes available? It’s not as though there are teams banging down Chris Young’s door right now.

What’s your thought? Do you think the Mets should sign Chris Young? Can they afford to? Why or why not? Post your opinion in the comments — and please provide more than “they have nothing to lose,” because the team’s current financial state requires that every signing be reviewed with a fine-toothed comb.

Back Blog Roundup: Johansanity
Next Brad Lidge Shocks the World