After a year of “retirement”, Keith Foulke would like to return to MLB.

And why not? With the state of bullpens across the NL and AL, he’s likely to get a guaranteed 7-figure contract simply for showing up to spring training in February.

“He is definitely going to play next year,” Foulke’s agent, Danny Horwits, said by telephone. “He just needed to get healthy.” 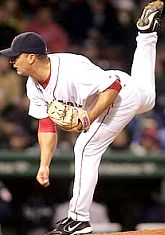 According to Horwits, the Red Sox will be the first team called to gauge interest. One would suspect that Foulke, an Arizona resident, would also be interested in the Diamondbacks. Whether either of those clubs would be interested in him is another matter.

Foulke turns 35 this Friday, but has a full season of rest. He recently had bone spur removed from his pitching elbow and will begin throwing in November. The surgery reportedly is not serious and requires a short rehab period, so he’s expected to be ready in time for spring training.

If he’s healthy, he would have to be a candidate for consideration by the Mets. His effectiveness as a pitcher spiraled downward immediately after the magical 2004 postseason — a period when he pitched in 11 of the 14 Red Sox playoff and World Series games, covering 14 innings and 257 pitches. That’s a lot of work in a short period of time, and likely had something to do with decline. He may not be the most talented closer of all time, but he’s a tough competitor and known to have pitched through pain.

A longshot, perhaps, but I’ll take a chance on him before bringing Guillermo Mota back.

Back A Different Look
Next Schilling to Phillies?