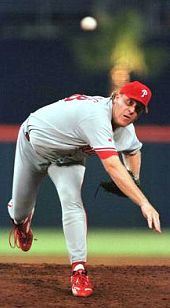 Well that’s a picture I don’t want to see again.

Before Curt Schilling was a big-mouth pitcher making cross-country headlines and competing for Cy Young Awards with the help of bloody socks, Curt Schilling was a big-mouth pitcher no one listened to because he toiled in Philadelphia for a very bad Phillies team. He looked to be a future star in Philadelphia while in his mid-twenties, winning 30 games in 1992 and 1993. However he won less than twenty over the next three years combined, and appeared on his way out of town before having a breakout year in 1997, pitching 254 innings and going 17-11.

The Phillies were an awful team back then, with a starting lineup comprised of guys like Rico Brogna, Marlon Anderson, Gregg Jefferies, Desi Relaford … oh wait, better description … um, the second-best pitchers to Schilling back then were hurlers like Paul Byrd, Robert Person … oh, never mind, take my word for it … even with a bunch of ex- and future Mets, they stunk!

Anyway, Schilling was dominating from then on, but was the only man on the Phillies staff who resembled a Major League pitcher, and they finally traded him to Arizona at the deadline in July 2000. From there you probably know the story — combining with Randy Johnson to beat the mighty Yankees in the World Series, pitching for the Red Sox with the bloody sock, calling out steroid abusers, blah blah blah.

After the World Series, Schilling becomes a free agent. He was asked recently about whether he’d consider returning to Philadelphia, and here was his answer:

“You have to put that my first choice is to stay here (Boston),” he said during batting practice last night. “But if it doesn’t work out, the Phillies are absolutely on the short list of places we’d want to go.

“There are probably still some people in Philadelphia who would rather not have me back. So we’ll just have to see how it goes.”

Lovely. Let’s hope that a) there are enough people in Philly who don’t want him back; b) the Red Sox want him back; or c) the Yankees are willing to open up the wallet for him.

Yes, the guy’s a pain in the neck and getting older, but he can still throw the ball with the best of them on some nights. He’s still one of the top ten or fifteen guys you’d want to start a postseason game. And at age 41 next year, he should still be able to give a team 150-175 innings, maybe 10-12 wins.

Sounds a lot like another 40-something year-old free agent pitcher, doesn’t it? Would you take Schilling or Tom Glavine if given the choice?

There is one side effect of the Curt Schilling signing with the Phillies — it could possibly keep them from signing Mike Lowell to play third base. Not sure about you, but I don’t want to see the Phillies getting either of these current Red Sox.

Back Bullpen Candidate
Next Mets Vulture Over Yankees?