Second Base Plan B 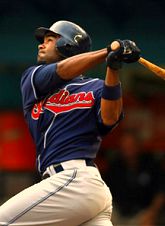 So Omar Minaya and Mark Shapiro had lunch and were supposedly talking about a deal that would send LHP Cliff Lee to the Mets. That would be a typical Omar move — pick up a guy who had success in the past, but is coming off a down year and whose value has sunk to minuscule levels.

But hold on here, the Indians have another guy whose value has shrunk, at a position where the Mets have a need: second base.

While watching the playoff games between the Indians and Red Sox, I completely lost sight of the fact that Josh Barfield was riding the pine — rookie Asdrubal Cabrera had stolen his job late in the season and proved to be a spark for the Injuns. It’s a foregone conclusion that Cabrera will enter 2008 as the starting second sacker.

So what does that mean for Barfield?

As a rookie in 2006, Barfield played in 150 games for the Padres and hit .280 with 32 doubles, 13 homers, and a .423 slugging percentage, while stealing over 20 bases. Yes, his OBP was abysmal — only .318 — but he was a 23-year-old rookie. After his successful inaugural season, it appeared that Barfield would be manning the keystone for years to come in San Diego, but they shipped him out to Cleveland for third baseman Kevin Kouzmanoff. With the Indians, Barfield was so-so, with his offensive numbers dropping off significantly — 3 HR, .243 average, .270 OBP, .324 SLG. Yes, those numbers are ugly, and he’s still way too aggressive. But he turns just 25 next month, has enjoyed success in the recent past, and had a pretty slick glove before moving to Cleveland. Maybe the trade messed with his psyche, or maybe he pressed with the bat. Point is, he’s young enough and talented enough to reverse the slide and make progress again — and he’ll come REALLY cheap.

Back in 2005, the Indians gave up on another 25-year-old second baseman who appeared to be regressing instead of improving. He was dumped on the Reds for a PTBNL. His name was Brandon Phillips. (Ironically, Phillips was acquired by the Indians along with Lee, in the deal with the Expos for Bartolo Colon.)

Wouldn’t it be just like Omar to make an under-the-radar deal for Cliff Lee, and get Josh Barfield as a “throw-in” ? And then see Barfield return to the form that made him the #1 prospect in San Diego’s organization just two years ago?

From Baseball America, circa 2005:

“Barfield has a quick swing and uses the whole field, with no discernible weakness when it comes to pitch location. His power continues to develop and he projects to hit 20-25 home runs annually in the big leagues. Barfield provides an argument to those who believe that there’s no such thing as clutch hitting. He seems to take pressure situations as a personal challenge. Over the last three years, he has hit an average of 52 points higher with runners in scoring position, including a .331 mark in 2004. He’s an average baserunner, making up for speed that’s a tick below-average with excellent instincts.”

So if talks with Luis Castillo fall through, perhaps Barfield could be an option as “Plan B”.

Back Glavine Update
Next Someone Wake Up Omar