Youkilis To Japan, Pill To Korea, Stubbs to Colorado

Two more first basemen are off the market, with both fleeing to Asia.

The Greek God of Walks, Kevin Youkilis, is heading to Japan to play for Rakuten. Reports suggest it’s a one-year deal for about $5M. It’s somewhat odd that the Mets executives are so big on taking pitches, getting on base, and hitting the ball over the fence, yet didn’t seem to ever show any interest in Youkilis. I realize he’s not the MVP candidate he once was, but one would think the Mets would at least kick the tires on someone who symbolizes their offensive ethos. (See what I did there?)

The San Francisco Giants have about 17 players who play first base and outfield, so perennial prospect Brett Pill has agreed to be sold to the KIA Tigers of the Korean Baseball Organization. Though he’s no Paul Sorrento, Pill has soul and will be appreciated by KIA for his crossover ability to hit righthanders and lefthanders. In all seriousness, Pill is another player that might’ve been an interesting option for the Mets, if not for their glut of first basemen. Pill spent the last four years mastering the PCL, but never had a true opportunity to play every day to prove himself in MLB. In AAA, he’s developed into a decent on-base guy with good power, and makes plenty of contact; he struck out only 54 times in 573 plate appearances in his last full season with Fresno (2011) while clubbing 25 homers. He swings from the right side and can also play a little bit of left field; in my mind, he might’ve been a potential platoon partner for Lucas Duda at 1B, while also getting some reps in one of the outfield corners.

In other news, Kurt Suzuki signed a one-year, $2.75M deal with the Twins. Suzuki presumably will take over as the full-time backstop so that Joe Mauer can move to first base. Mauer was shut down due to chronic concussion symptoms that began after an Ike Davis foul tip bounced off Mauer’s mask.

Another LOOGY, J.P. Howell, signed a two-year, $11.25M deal with the Dodgers. The price of a decent LOOGY is not going down.

The Royals get infielder Danny Valencia from the Orioles in return for outfielder David Lough. Valencia has showed some surprising pop, particularly against LHPs, both in his full-season 2011 audition and as a part-timer in Baltimore last year. Lough is another one of those speedy ballplayers that are valuable in large parks.

The Rockies acquired Drew Stubbs from the Indians in return for LHP Josh Outman. We discussed the possibility of Stubbs leaving Cleveland after the Tribe signed David Murphy. I know Stubbs strikes out frequently, but have always liked his athleticism, particularly his speed. He’d be a good fit for the cavernous outfield of The Park at Shea Bridge — offensively and defensively. But then again, Matt den Dekker (or Kirk Nieuwenhuis) may turn out to be a somewhat slower, less powerful version of Stubbs.

Ah, the bookends of this story go together, considering that part of a three-team blockbuster included the Cincinnati Reds trading Drew Stubbs to the Indians last year for Shin-Soo Choo. That deal — which occurred around this time last year — also included shortstop Didi Gregorious, who has drawn the interest of many in the Mets blogosphere.

Do you know a Mets fan who has everything and likes to tailgate? How about buying for him/her a New York Mets Portable Party Refrigerator

? It runs on 12-volt DC power (such as from a car lighter) or from standard 110-volt AC power. There’s only one left at Amazon, so act quickly to buy it. Shipping is free if you don’t mind getting it after the holiday. Or, there’s time to get it under (beside?) the tree by Christmas if you choose “one-day” shipping. 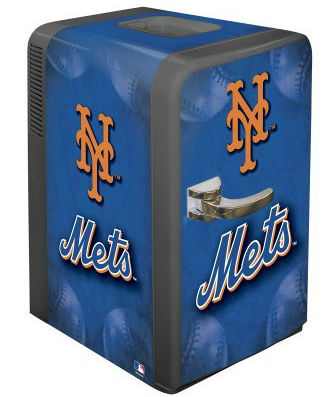