The Mets have won two stunners in a row against the rival (still, I guess) Phillies.  First, a Jordany Valdespin homer off of Jonathan Papelbon helped them overcome a good start by Roy Halladay.  Then, a series of 2-out singles and some Phillies Phielding Phollies helped the Mets beat the red hot Joe Blanton 7-4.  What will they do for an encore in the final game of the series?  Maybe a two-out rally in the 9th?  Or maybe get a lead and hold it throughout the game – that would be novel.

Here’s some late-inning magic from the Blogs: 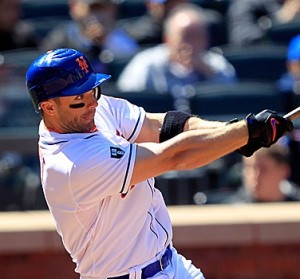 There have been times over the past couple of years where a Mets record of .500 was a good thing.  But after a 7-3 start in their first 10 games, the Mets have gone 1-5 against the Braves and the Giants to drop their record to 8-8.  The hope, if you’re looking for some, is that they have a tough schedule in April.  A .500 record at the end of this month would not be the worst thing in the world.  By the way, has anyone seen Ike Davis‘s swing?