The Mets are heading towards their first potential major free agent defection since the end of the 2000 season. In fact, throughout the entire 35 years of free agency, only a handful of key players ever left the team for greener pastures. This does not include a plethora of bad trades, bungled roster moves or the like, but players the team wanted to keep but couldn’t. Should the Mets re-sign Jose Reyes? Perhaps history will serve as a guide. For clarity the player’s last year with the Mets appears in parenthesis.

1.Darryl Strawberry (1990): Until recently the best offensive player the Mets have ever produced, Straw’s contract expired at the end of the 1990 season. At the time he was at the pinnacle of his career: at age 29 he was on pace the break the all time home run record and was coming off a 37-home run season. Darryl spurned the Mets, instead inking a lucrative five-year $22.25 million contract with his hometown Los Angeles Dodgers. He proved to be a bust in LA, hitting only only 38 home runs in three years there before being released. He drifted to San Francisco and then later to the Yankees where he enjoyed a revival of sorts, but his sure-fire Hall of Fame career when he left the Mets was lost in a haze of injuries and drug abuse. He has since reconcilled with the Mets and recently surfaced, warning Reyes to stay in New York. Hard to envision what could have happened had he stayed (many blame the influence of hometown friends on his demise in LA) but the cost of replacing him—first Vince Coleman and then Bobby Bonilla—ushered in a Mets Dark Age that lasted from 1991 to 1998 and the arrival of Mike Piazza.

2.John Olerud (1999): This one hurts. Ole revitalized his career in New York after then-GM Joe McIlvaine stole him from Toronto for Robert Person. Ole hit .354 for the Mets in 1998 and was the first baseman for “the greatest infield ever” in 1999. He departed after that season for his hometown of Seattle where his offensive revitalization continued. He also logged time with Boston and the Yankees before retiring with a .398 career OBP. To replace him, the Mets signed Todd Ziele, who did an acceptable job at first for a few years before departing via trade to Milwaukee after the 2002 season. The Mets could have used Olerud’s bat in the Subway Series and in their failed defense of the NL title in 2001.

3. Mike Hampton (2000): Mike arrived two days before Christmas in 1999 for Octavio Dotel and Roger Cedeno. He helped anchor the rotation in for 2000 NL Champion Mets, going 15–10 with a 3.12 ERA and winning the MVP of the 2000 NLCS. Then he departed for Colorado, making the infamous “the schools in Colorado are better” remark. Injuries derailed Mike’s career and his 8 year, $121 million dollar contract is widely regarded as one of the worst free-agent signings in MLB history. As compensation, the Mets received Colorado’s pick in the draft and took an infielder you may have heard of: David Wright.

4. Sid Fernandez (1993): By the end of 1993 season all of the shine was gone from the 1986 championship team. One of it’s last remaining links was El Sid, who’s pitching performance in Game Seven of the 1986 World Series is still one of the most underrated efforts in team history. McIlvaine told reporters he wanted to keep Sid, but instead the Baltimore Orioles signed him to a three year deal. Sid was clearly done by this time, lasting parts of two seasons with Baltimore and one season each in Philadelphia and Houston. As compensation, the Mets used Baltimore’s pick in the draft to get Jay Payton. One of the most enigmatic players in Met history, Payton overcame several years worth of injuries to hold the starting CF position for the 2000 champs.

5. David Cone (1992): OK this one doesn’t really count, as Cone was traded to the Blue Jays right at the end of August. But he was in the last month of his contract and it was generally assumed that he would not resign with the Mets. GM Al Harazin realizing Cone was leaving, went into panic mode and moved him quickly to the Jays. Backing up the old adage that even a blind squirrel finds a nut occassionally, part of the haul included an unknown second baseman named Jeff Kent. Unfortunately, the Mets didn’t know what they had in Jeff and watched as he fueded with teamates, the press and the fans until they shipped him to Cleveland in the ill-fated Carlos Baerga deal. Later Kent developed into a Hall of Famer with the San Francisco Giants. Cone went on to spectacular career: winning a World Series with Toronto and a Cy Young Award in Kansas City. He then went to the Yankees (they do have a fetish for ex-Mets, no?) where he won four rings, pitched a perfect game and got Mike Piazza out in a crucial spot in Game Four of the Subway Series.

Honorable Mentions: Al Leiter, John Franco and Mike Piazza. In all cases the Mets let these long-time stalwarts leave without an arbitration offer, meaning they had no intention of keeping any of them.
Epilouge: In all but one case (Olerud) the Mets guessed right in letting their big ticket players go. The haul in return was a franchise player (Wright), a useful piece (Payton) and the One That Got Away (Kent). The real lesson is the Strawberry situation. Just a hunch, but Jose Reyes’ .337 season and the NL batting crown is going to be as good as it gets with him. However, if the Mets are going to let him walk, it had best be as part of a plan for a rebuilding instead of a makeover. No trying to replace him with expensive pieces that they reward for their previous efforts with another team. They shouldn’t worry about what the fans think. The hard core fanbase will accept a rebuilding with a purpose. The good news for the Mets is that the hard core fanbase is all that is left them. 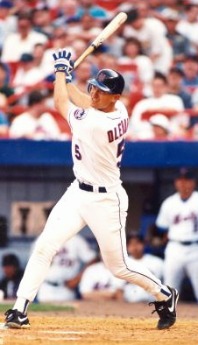