I know many Mets fans were hoping to get Nick Swisher under the Christmas tree, but it wasn’t meant to be.

Texeira and Swisher to Yankees

That would be KANEKOA Texeira, not MARK TEIXEIRA.

Very strange deal from the Yankees’ POV, and in my estimation they overpaid.

In Swisher, the Yankees get a left-handed hitting corner outfielder and first baseman, to add to their deep stash of lefthanded-hitting corner outfielders. Though they are looking for a centerfielder, and Swisher plays the position, it’s doubtful he’s their ideal choice there. Why they were so hot to trade away top prospects and a very serviceable bench guy in Betemit, is a little puzzling. I suppose they see Swisher as a more athletic version of Jason Giambi. And it makes sense in a market devoid of any decent first basemen after Teixeira.

For those who aren’t aware, Marquez is a pretty strong prospect. He struggled in his transition from AA to AAA, but before 2008 was ahead of, and better ranked, than either Bobby Parnell or Jon Niese are now. Methinks Ken Williams did well in stealing Marquez as part of the package. Nunez is no slouch either — he is exactly the type of sinker-slider guy Williams has been seeking. He could move quickly and find himself in the White Sox pen before the end of next season.

So much for Swisher going to Flushing. I doubt Mets fans would have been happy to see a package of Bobby Parnell, Eddie Kunz, and, say, Endy Chavez (for lack of a better comp) going to Chicago for him.

Expect to see the Yankees trade Hideki Matsui to Seattle now, as he has become redundant. Maybe Johnny Damon goes too. 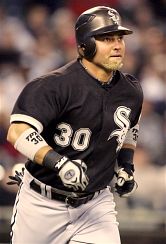