For the second time in two years, the Mets have sent Anderson Hernandez packing.

AHern was placed on waivers this week and claimed by the Cleveland Indians.

This move perplexes me from both sides. The Mets have a sudden issue in the middle infield, due to Jose Reyes’ indefinite thyroid condition. With Hernandez gone, the Mets have only two players in the organization with more than 5 games’ MLB experience at shortstop: Russ Adams and Alex Cora (oh, sorry, I forgot about Jolbert Cabrera … though, I wouldn’t consider him a shortstop any more than I’d consider Mike Jacobs a catcher).

What the Indians want with Hernandez is also a bit quizzical; they have veteran Mark Grudzielanek and AHern clone Luis Rodriguez fighting for the backup 2B spot — though I suppose neither is impressing Cleveland’s brain trust if they cleared a spot for Hernandez.

I don’t think Anderson Hernandez had much of a future with the Mets, and I think his value is as a defensive-minded second baseman — a luxury few rosters can afford in the 21st century. But after seeing that revolving door at shortstop last year — the one that ultimately moved the Mets to reacquire AHern — it seems strange he’d be let go. 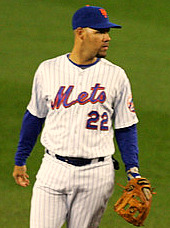 You may be wondering why we’re wasting precious space and bandwidth on Ramon Martinez. Some of you may even be shocked to know we’re referring to a nondescript utility infielder and not Pedro’s older brother.

Ramon Martinez is a 37-year-old middle infielder with limited range, below-average arm, and punchless bat. His batting average over the last three seasons in MLB is .192, which is under the Mendoza Line. Mario Mendoza, however, was a very good fielder. Martinez, on the other hand,

According to Mets.com, the Mets have agreed to terms with Alex Cora.

Well I guess that’s it — the offseason roster makeover is complete!

Cora should step right in to left field and provide the Mets with the much-needed power bat they need to …. oh, wait a minute ….

Last I checked, Alex Cora was a light-hitting middle infielder with a good glove and a good attitude. The kind of guy who is a capable middle infielder and can play a few other positions in a pinch without embarrassing himself (he’s played one career game each at 1B and LF, and has played 16 at 3B). On an American League team, he is an ideal backup / late-inning defensive replacement second baseman / shortstop for a team that has offensive-minded middle infielders. He’s also a good guy to have around in the event of an injury, as he can play competently for stretches at a time.

In other words, he’s Damion Easley, except that he has zero power, not as strong a bat overall, is a lefthanded hitter, and a better fielder. Oh wait, so maybe he compares more closely to Argenis Reyes or Anderson Hernandez … except he’s not a switch-hitter. And he costs at least four times more.

In short, I’m not sure about the logic behind this signing. With a roster comprised of a dozen pitchers, bench spots are precious, and need to be filled by people who can play both sides of the game — offense and defense. Cora doesn’t have much of a bat, and is only an average baserunner. I’m assuming he can bunt. He does have a career .264 average as a pinch-hitter, which is pretty good. However, as a lefthanded hitter, he strangely has a much better average against lefthanded pitchers — not righthanders — and we know that Jerry Manuel will either not notice this fact or ignore it, and use him exclusively against righthanded pitchers.

Speculation is that Cora would push Luis Castillo, and possibly take over second base eventually. Hmm … so, the Mets won’t go after Orlando Hudson because they don’t want to eat Castillo’s contract, but it will be OK to bench Castillo (and, effectively, eat his contract) to play a mediocre talent such as Cora at the position? More to the point, does this mean that the Mets find Cora to be a better low-cost alternative for second base insurance than, say, David Eckstein?

I don’t mean to bash Cora — I actually believe he’s a solid all-around ballplayer. Nothing special, but solid. He’s not unlike Miguel Cairo. A good guy to have on the team, if you can afford the luxury. And that’s where I have a problem. The Mets supposedly don’t have the money to spend on a top-flight pitcher such as Derek Lowe, but they have no problem spending an unnecessary $2M for a veteran utilityman that is not necessarily an upgrade over a player who would cost the league minimum (such as Argenis Reyes, Alex Cintron, Angel Berroa, Chris Burke, or Ramon Martinez). This is my point: if you are willing to spend $2M for a utility infielder, why in the world aren’t you spending it on someone like Nomar Garciaparra, Mark Loretta, or Ray Durham — in other words, a guy who you know can give you an offensive boost? Because last I checked, the Mets don’t need a defensive replacement for Jose Reyes nor David Wright — and I’m not seeing Castillo leaving games because of his defense, either. (Loretta, by the way, signed for $1.25M, and would have been a much more interesting option to platoon with / push Castillo).

Overspend for a substitute player of which there is a surplus of talent, but underspend for starting pitching. Not exactly the trend followed by championship ballclubs.