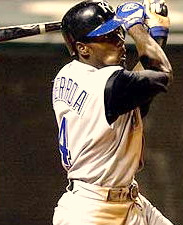 You know it’s a slow news day when the headline is Angel Berroa.

The Mets — who signed Berroa on July 11th and assigned him to AAA Buffalo — have added the veteran infielder to the 25-man roster, replacing Argenis Reyes.

I liked the idea of Berroa as far back as late May, and still think it’s a low-risk move that isn’t going to hurt anything.

Berroa is a slick fielder with a cannon of an arm, no plate discipline, but has shown occasional pop in his past history (none of it recent, unfortunately). I doubt he can come in and replace Alex Cora at shortstop, but there’s an outside chance he can be more productive than Argenis Reyes off the bench as a pinch-hitter. Going along with Mets’ train of thought and scouting analysis, I imagine the next paint for the wall would be Wilson Betemit, assuming he can be pried away from the White Sox (maybe they’d take Angel Pagan? I mean if the Braves took Ryan Church for Jeff Francoeur …).

Back in 2003, Berroa was the AL Rookie of the Year Award, hitting .287 with 17 HR and 73 RBI as Kansas City’s starting shortstop. He hit .270 with 11 HRs as recently as 2005, but his career went downhill quickly ever since. I’m sure it’s only a coincidence that steroid testing began around that time. And I’m sure that Dominican birth certificate is legit, and he’s really 31 and not 34 or 35. In any case he’s ours now so woot-woot!

In other news Omar Minaya said Carlos Delgado won’t be ready to come back until August, there is no update on Carlos Beltran, and Jose Reyes “might” be back before the end of this month. For those wondering, the Mets do not play at home until July 27th against the no-draw Rockies. I’m sure the information about Reyes had nothing to do with potential ticket sales — so stop it, all you conspiracy theorists!