Ruben Gotay Back On the Radar 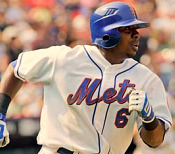 He was in the midst of being the Mets’ version of Robinson Cano a few years back, but was curiously hated repressed by then-manager Willie Randolph (and undervalued by Marty Noble). Willie valued defense at second base, but was generous enough to give the iron-gloved Gotay a start whenever Halley’s Comet appeared.

Though the switch-hitting second baseman hit .295 in limited duty in 2007, he didn’t make the club in ’08 and was picked up by the Braves, where he slipped to .235 in even more limited playing time. Last year was spent in AAA Reno (Diamondbacks system) and he hit 11 HR, 57 RBI, .292 AVG., .429 OBP, and .879 OPS — with an eye-popping 102 walks in only 118 games. This performance was enough to draw the interest of Dave Cameron over at FanGraphs, who put him at the top of the list of “interesting guys available” among minor league free agents.

I have to admit, I always had a soft spot for Ruben Gotay, and felt he deserved better from Willie and co. Now that the Mets could be in the market for a backup infielder, why not consider another go-around for Ruben?

True, his glove has never been great, but it’s not nearly as bad as Randolph made it out to be, and he did display the physical capabilities of range, strong arm, and soft hands. He’ll never win a Gold Glove but if he can get on base over 40% of the time and slug over .400 he won’t need to. Further, Gotay already showed he can both play in New York and be effective off the bench (if given the chance) — he led the Mets in pinch-hits in 2007.

Yes, he put up these impressive numbers in a “hitter’s league”. But Gotay always hit at every level in the minors — and in fact his numbers were almost identical to those of Cano at similar points in their minor league careers. I’m not saying he’ll turn into Cano — only getting across that Gotay has consistently been impressive offensively, and that his recent success is not a mirage.

To refresh your memory, Gotay is a switch-hitter, his primary position is second base, he can also play shortstop in a pinch, and he can handle third base. He has above-average speed that combines with heady baserunning and he hustles. And, he turns 27 on Christmas Day — so he’s about to enter his peak years as a ballplayer.

Oh, and may I reiterate that he’s a minor league free agent, and will cost nothing more than an ST invite? If he makes the team he’ll likely receive the MLB minimum salary.

Or the Mets can give Alex Cora a guaranteed, multi-million-dollar contract to hit a weak .250 and be a team leader (from the bench).