Beltran is the Reason the Mets Stink (?) 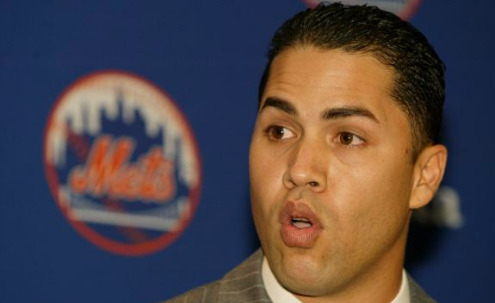 It’s amazing that I can spend hours and hours going through video slo-mos to put together thought-provoking posts on K-Rod’s hidden ankle injury, Mike Pelfrey’s mechanical flaws, and the proper way to “frame” a pitch, and those articles get little or no attention from the mainstream blogs.

But I pose one offhand, half-joking question buried in the game notes of a recap about the coincidence between the Mets sleepwalking and the arrival of Carlos Betlran, and the sentence gets picked up all over the blogosphere, causing comments from dozens of ill-mannered people with their hair on fire. Go figure.

My apologies to everyone who found my question “embarrassing”, “reprehensible”, “idiotic”, “stupid”, etc. I have to admit I’m stunned by the volume of vile responses both here and on other blogs. I had no idea there were that many maladjusted people with an unnatural emotional attachment to Carlos Beltran.

Here is the question once again, for those who missed it yesterday:

Is it a coincidence that the Mets’ overnight change from a fighting, tenacious team to a bunch of sleepwalkers began when Carlos Beltran returned to active duty?

The question mark at the end means it’s a question. Questions are posed for the purpose of discussion. Instead, most people chose to see this as a statement and indictment of Carlos Beltran, and directly attacked me personally. Luckily, my skin is about eight inches thick, and I hope all the clever driveby commenters enjoyed their sophmoric epithets.

For those who weren’t paying attention, much was made of the “chemistry” when the Mets were doing well. Various media and blogs couldn’t say enough about the “new attitude”, “fight”, “spirit”, and overall camaraderie that existed on the Mets in 2010. More than one highly respected journalist publicly stated or wrote about how the 2010 Mets clubhouse had a much more positive vibe than in years past, mostly thanks to having “personalities” like Jeff Francoeur and Rod Barajas around, and also because it was “finally David Wright’s team”.

Was it true that the clubhouse attitude was different thanks to the new mix of players? Probably. Was it the main reason the Mets had a winning record, and were sitting in second place before the All-Star exhibition? Maybe, maybe not — who knows? The Beaneheads have yet to figure out a stat to measure team chemistry.

Yes, the Mets dropped two to the Braves heading into the break. But they also ran into a red-hot Braves team. And yes, the Mets lost two of three to Reds before that and they lost a series to the Marlins a week before that. But they did split a series with the Nats and won series from both the Tigers and the Twins in the weeks before the break, and from Opening Day through the break they displayed a level of hustle, effort, and gumption that was missing in past years from more talented teams. I admit that is a subjective opinion and some (many?) people may disagree. But that’s what my eyes saw.

In the 8 games since the break, the Mets have looked lackluster. Their body language — to me — has significantly changed, for the worse. To me they look like they’re sleepwalking. To me, they resemble the Mets of 2007-2009.

So what has changed since the break? For one, Carlos Beltran is back in uniform. Does that mean I blame HIM for my perceived change in attitude? Not necessarily. What we MIGHT question, however, is whether the changes that had to happen to put Beltran back in the lineup had an impact on the attitude. Namely, the removal of “Mr. Personality” Jeff Francoeur from regular duty and the shift of Angel Pagan from centerfield to right field.

At the same time, Josh Thole has taken playing time away from Barajas and Henry Blanco (two who were lauded as clubhouse and on-field “leaders”), and supposed “cancers” Oliver Perez and Luis Castillo returned to the roster. So maybe it was unfair to identify Beltran only in my question; the reason I did was because he was the individual that everyone seemed focused on as the person who would have the most impact on the club — he is a marker, a symbol, if you will. Further, the team’s great chemistry was positioned as going hand in hand with the emergence of David Wright as the team leader. If Beltran is back, can Wright still be the leader? Or must he step aside and allow Beltran to lead the team? And if indeed Beltran is identified as the leader, is it unfair to question whether the change in leadership is related to the change in attitude? I say QUESTION, not indict — there is a difference.

On another note, in addition to the hype about the team’s chemistry, there was hype about the Mets’ improved defense, particularly in the outfield. Francoeur has been horrendous at the plate lately, but his defense has been stellar and sometimes game-changing. At the same time, Pagan has been outstanding in center field. Outfield defense and athleticism has been mentioned many times in various channels as part of the reason for the Mets’ success in Citi Field.

So when Beltran and his bulky knee brace was inserted into centerfield, the Mets immediately downgraded their defense in center and also in right, because Pagan is good but not as good as Francoeur defensively in the corner. Though, it can be argued that defense has had nothing to do with the Mets’ struggles, since their offense has been so anemic. Again, I don’t think it’s unfair to pose the question, since six of the losses were by a margin of two runs or less. Yeah, if the Mets scored more then the defense is moot; but when you’re only losing by one or two runs, every detail is magnified, both on offense and defense.

To be clear, do I truly believe Carlos Beltran is the sole reason the Mets have been awful in the second half? Of course not. But do I think it’s worth discussing whether the dynamics surrounding his return may have had some influence on the team’s current woes? Yes, absolutely. That doesn’t mean Beltran is to blame — only that he’s a victim of bad timing.