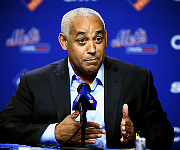 For several years, many pundits (including myself) have criticized Omar Minaya for his lack of a “Plan B”, or “backup plan”.

It turns out that we simply didn’t understand Minaya’s genius. He never had a “backup plan” because from the beginning he’s been working with a “backward plan”.

We have to go back far in time to explain — specifically, to June 12, 2003, when Steve Phillips was fired.

It was on that day that Jeff and Fred Wilpon announced a new direction for the organization. From The New York Times:

Mets fans are shouting hallelujah. If they’re not, they should be.

Wilpon made the call he should have made two years ago.

And from ESPN (link is dead):

Wilpon said all the money he’s spent on the team doesn’t ensure success. “We’ve learned that painfully,” he said.

The Mets (28-35) got off to a bad start and never recovered, hurt by injuries and inconsistent play by their stars.

“This has been a very disappointing season,” Wilpon said. “We will attempt to energize the team … by getting younger and more athletic.”

This “younger and more athletic” became a mantra when Jim Duquette took over for Phillips, and remained “the plan” when Omar Minaya was hired after the 2004 season. The Wilpons made it very clear in that Minaya was chosen because of his ability as a “talent evaluator” — pointing specifically to his discovery of Sammy Sosa and development of Juan Gonzalez. As a result of his being hired, everyone expected the Mets to “build from within” and create an organization that would constantly supply top-notch prospects. It might take some time, but the Mets were going to finally do the right thing.

Minaya immediately made moves that reflected that philosophy, starting with the hiring of Willie Randolph as manager. Randolph was hired partially — if not mainly — because he was seen as a valuable tutor to Derek Jeter, Alfonso Soriano, and other Yankees youngsters who turned into stars. Randolph’s lack of managerial experience was not an issue, because his greater value would be in developing all the youngsters that the farm system would be sending to the big club. There would be flocks of energetic, youthful, and athletic players coming up — much like the Mets of the 1980s — because Minaya’s next moves were in overhauling the scouting staff, from the directors all the way down to the part-time area scouts. And the team would not only be finding the best young talent in America, but they’d also be aggressive in Latin America.

Suddenly, though, the plan changed. Less than 90 days after all that talk about talent evaluation and building from within with youth, Minaya signed the aging superstar Pedro Martinez to a 4-year, $53M deal. It was spun as a way to “legitimize” the Mets, to show the world that they were “serious about winning”, and that Pedro’s presence would influence talented Latin American youths to sign with the Mets as well. Less than a month after the Pedro signing, Omar opened up the Wilpons’ wallet again and granted Carlos Beltran an outrageous 7-year, $119M deal. Immediately thereafter, Minaya went hard after Carlos Delgado — so hard that Delgado was turned off and signed with the Marlins. How exactly was this “building from within”?

With the signing in December of Pedro Martinez, and this week’s signing of Beltran, that portion of Mets history concerned with the development and display of a home-grown baseball team appears to be over.

Now, the strategy is to handle problems the way the Yankees always have, by throwing money at them.

So here we are, almost six years after Minaya was hired, and the Mets are now — right now — committed playing home-grown, energetic, and athletic youngsters such as Ruben Tejada, Josh Thole, Ike Davis, and Fernando Martinez.

While some GMs start the rebuilding process at the beginning of their helm (Bobby Cox, Pat Gillick, Frank Cashen to name a few), and then add the high-priced free agents after the organization has turned around and is on the verge of winning, Minaya has chosen to do the opposite — he spent the big bucks right away, then turned toward youth toward the end of his tenure.

In other words, a backward plan.