Since the Mets have done little in the way of providing storylines this winter, the media and blogosphere has had to grasp at straws in order to create content that involves the Major League Baseball team in Flushing. 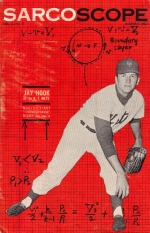 One of the more recent angles has been the “intelligence” of the Mets’ new front office and their possibly not-so-coincidental targeting of similarly “smart” baseball players.

If you haven’t already read, new GM Sandy Alderson is a graduate of both Dartmouth College and Harvard Law School; his assistant Paul DePodesta is also an Ivy Leaguer, a grad of Harvard. Their combined smartness is expected to make the Mets a better organization. If you believe the Mets were a “dumb” organization before, then there is certainly some credence to that thought — even if DePodesta’s brains didn’t keep the Dodgers from recording the second-worst record in their LA history in 2005.

But when the intelligence angle is extended to the players, I’m not so sure it holds much water. The prospect of seeing brainiacs Chris Capuano, R.A. Dickey, and Chris Young in the clubhouse was interesting enough for an article in The New York Times, but that trio’s success will depend much more on their arms than their heads.

Maybe I’m just being my typically pessimistic self, but it wasn’t that long ago that the media made a big deal of John Maine’s intellect. More recently, there was Stanford grad Chris Carter, whose background in stem cell research apparently wasn’t valued enough by the Mets’ braintrust to offer him a contract.

One of my all-time favorite baseball stories about intelligence was rehashed by Mets By the Numbers a few days ago. It recounted the story of Jay Hook, an original Met whose sketches describing the Bernoulli Principle’s involvement in the flight of a curveball were published in an industrial magazine (pictured left, from the MBTN website). As it would happen, not long after the article’s publication, Hook was lit up (as he often was) by the opposition’s bats, prompting manager Casey Stengel to remark, “It’s wonderful that he knows how a curveball works. Now if he could only throw one.”

I know, I know — it’s a slow winter, and the writers have to come up with something. Intelligence is as good a topic as any; it’s hard to argue — at least, when there aren’t games being played — and getting smart ballplayers neatly follows the story of the intellectuals in the Mets’ fantasy front office.

What do you think? Would you feel more confident about the Mets’ chances if they acquired players with higher IQs?

Back More Details on Chris Capuano
Next 28 DUPACR: The Hammer