Three Shortstops the Mets Can Acquire and Afford Now 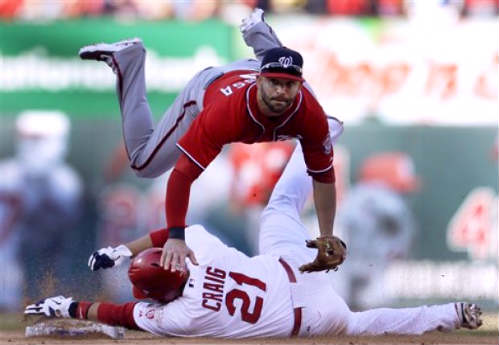 Shortstops are at a premium right now. It seems that every MLB team has at least one shortstop who exhibits one above-average MLB tool — except the Mets. But don’t trust me, look around at MLB rosters and see for yourself. No, not every club has a Troy Tulowitzki or Jose Reyes, but nearly every club has a shortstop who is either a very strong defender (i.e., Brandon Crawford, Zack Cozart) or contributes offensively (i.e. Ian Desmond, J.J. Hardy). Additionally, there is a slew of young two-way shortstops who are starting to make their mark (i.e., Andrelton Simmons, Jean Segura, Starlin Castro).

And then there is the Mets, who have neither an exceptional fielding shortstop anywhere in their organization, nor do they have a shortstop with a plus offensive skill. No, the Mets have Omar Quintanilla and Ruben Tejada.

What makes matters worse is they don’t have much to offer in trade for what a decent MLB shortstop costs. Oh sure, they COULD trade someone like Noah Syndergaard and/or Jonathon Niese, but can they afford to?

I found three potential MLB shortstops who can probably be had for what the Mets can afford to trade. Note the second half of that sentence. So nope, not one of them is Jed Lowrie. We keep hearing buzz in the blogosphere about Lowrie (as well as Asdrubal Cabrera, among others), but I really don’t believe the A’s are going to give away Lowrie for whatever garbage Mets fans think Billy Beane will take. These are more realistic targets, and none without a flaw.

Danny Espinosa
I don’t know if the Nationals would be willing to make a trade inside the division, but it’s worth a shot. If I could have any shortstop in the Nats organization, I’d take Zach Walters, a big switch-hitter who is coming off a 29-HR, .803 OPS campaign in the pitching-rich International League. But the emergence of Walters, as well as that of Anthony Rendon and Stephen Lombardozzi, has made Espinosa expendable. Before you say, “he’s a second baseman, and he can’t hit,” let me remind you that Espinosa came up as a shortstop, and displayed very good defensive skills there, including a plus arm, before moving to second base to make room for Ian Desmond. Espinosa is coming off a terrible 2013 — one in which he was demoted to AAA — and will have a hard time making the Nats out of spring training. Yes, he strikes out a ton. Yes, his OBP is low. But, he’s extremely durable (he played 158 and 160 games in 2011 and 2012), he’s a switch-hitter who hits with 15-20 HR and 30-35 doubles power, he’ll steal 15-20 bases, and he’ll provide above-average defense. Complain all you want about his deficiencies, but chances are good the Mets can acquire him for a song, they won’t have to pay him very much, and he’ll outplay any shortstop the Mets currently have in their organization.

Dee Gordon
It’s official: I have an unusual fixation for Gordon. It was around this time last year that I also suggested the Mets make a deal for Gordon. I think it’s because of his speed and raw athletic ability that makes me continue looking at him as an option. One year later, Gordon seems more expendable and his stock has dropped — which means the Mets can probably pick him up for players they can afford to part with. Now that the Dodgers have signed Cuban infielder Alex Guerrero and already have Hanley Ramirez, they have Gordon experimenting in center field in winter ball. In 92 AAA games last year, Gordon hit .297 with a .385 OBP, stealing 49 bases and swatting 9 triples. He’s never going to hit homeruns, and he’s still erratic in the field (18 errors). But, if he were perfect, the Mets wouldn’t be able to put together a package for him, would they? Gordon turns 26 in late April, and is still young when you consider how late he began playing baseball (in other words, there could be room for him to continue improving). I’m not suggesting he’d be an All-Star, but he has one unteachable skill (speed), and at the very least, I’d like to see him in spring training to provide competition (read: motivation) for Ruben Tejada.

Jeff Bianchi
Who? You may or may not remember seeing Bianchi when the Mets played the Brewers. Personally, I remember him mainly because every time Howie Rose mentioned him, I thought he was saying “the Yankee.”

Bianchi is Milwaukee’s version of Reese Havens: a second-round draft pick with high hopes of eventually filling a middle infield spot for years to come, but never realizing his potential due to chronic injuries. Unlike Havens, Bianchi finally made it to the bigs, but now, the 27-year-old is blocked by the aforementioned Juan Segura. Bianchi has played 120 games in a season only once (2009), but when he has played, he’s hit — in 92 games in 2012, he batted .325 with a .809 OPS. Last year, in 100 MLB games, his offense was less than impressive, but he was in a bench role, serving as a pinch-hitter and utilityman. Defensively, he’s no Ozzie Smith, but his average range is enhanced by an above-average arm, sure hands, and strong fundamentals. On offense, he won’t hit homeruns and won’t walk very much, but his short stroke provides plenty of contact. His toolset reminds me of Bucky Dent; not spectacular, but you know what? I think the Mets would take Bucky Dent in his prime right now. Like the other two suggestions, Bianchi is not without his flaws, but he’s a shortstop who is probably better than what the Mets have now, at worst will provide much-needed competition at the position, and can be acquired from something the Mets can afford to lose, AND fits into their small-market budget.

What say you? Do you like any of these ideas? Have any better ones? Answer in the comments.