The clock has struck four and the apple in Citi Field may as well be a pumpkin.

No trades for the Mets, but a flurry were made by others. Since the 2 PM update, the following occurred.

Red Sox get Victor Martinez
The Bosox were expected to do “something”, and they did, moving Adam LaRoche (see below) and adding Casey Kotchman and Victor Martinez to their lineup. Martinez can catch, play 1B, and DH; his presence along with Kotchman’s likely means “Big Fraudi” Ortiz will have more time to “research” his PEDs usage. The Red Sox gave up three pitchers — Justin Masterson, Nick Hagadone and Bryan Price. Nice haul for the rebuilding Indians, and a deal that helps both clubs going in opposite directions.

White Sox acquire Jake Peavy (again)
This time Peavy OK’d the deal, according to various sources. What changed since the last time? More importantly, Peavy is currently on the disabled list. Isn’t there an MLB rule stating that a player on the DL cannot be traded? The Padres get a foursome of prospects: Clayton Richard, Adam Russell, Aaron Poreda and Dexter Carter.

Nationals trade Nick Johnson to the Marlins
Stunning to see an in-division deal, but the Nationals are so far down in the standings they’re listed in the Central. The Fish gave up minor-league LHP Aaron Thompson, a 2005 first-round pick who compares to Tom Glavine — meaning, a soft-tosser (89-91 MPH fastball) who relies on control and guile. The 22-year-old has struggled with injuries and has been something of a disappointment. I’m not sure who he would compare to in the Mets’ system … maybe Michael Antonini? (Though, Antonini is two years older.) But stop thinking about it … where would you put Johnson with Dan Murphy entrenched at 1B?

Nationals trade Joe Beimel to the Rockies
Lucky for the Mets, they just missed seeing the LOOGY face their slugging LH hitters in key situations (had there been any such situations, or if the Mets had any dangerous LH hitters). They also missed out on adding him to their own bullpen. The Rockies gave up two undisclosed minor leaguers.

Blue Jays trade Scott Rolen to the Reds for Edwin Encarnacion
This deal had been rumored for several weeks, with the Jays supposedly uninterested in the free-swinging Encarnacion. But they came to their senses when they realized that free swinger was only 26 years old and is as good a fielder at the hot corner as Rolen used to be. Being 13 games out tends to knock sense into teams.

Braves acquire Adam LaRoche from Red Sox for Casey Kotchman
Whoa! Where did this one come from? Theo Epstein’s saberbrain loves Kotchman’s OBP, youth, and contract status. We thought the Braves didn’t like LaRoche’s passive attitude, but I guess they’ll look the other way and focus on his homerun bat. Instant upgrade for the Bravos.

In our latest edition of Window Shopping, we look at the Washington Nationals. Since they’re on a pace to threaten the ’62 Mets record for losing — and win the Bryce Harper sweepstakes — they should be sellers. Problem is, you have to actually offer something of value in order to make a sale. And not unexpectedly, the Nats strongly resemble a dollar store.

Nick Johnson and Other Rumors 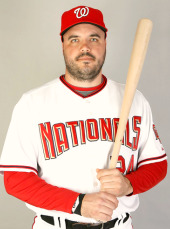 A week ago, rumors were swirling around Nick Johnson and his possible move to either Boston or New York. Today, Ken Davidoff writes that Johnson, Austin Kearns, and Josh Willingham are the top pieces of trade bait for Washington. And according to Gordon Edes of Yahoo, the Nationals are scouting Jonathan Niese, Mike Antonini, and Eddie Kunz.

However, I’d be surprised if the Mets pulled the trigger on a deal now, as they seem content to give Fernandog Martinez a full shot in right field, and Dan Murphy has cemented himself at first base for at least two weeks after a three-hit, five-RBI day against those same Nationals.

In other news, the Yankees are supposedly looking at Mark DeRosa, another guy who looked like a target a week ago. But with Alex Cora coming off the DL next week, and, again, Murphy doing the job at 1B, it would seem that if DeRosa does come to New York, he’ll be in pinstripes. 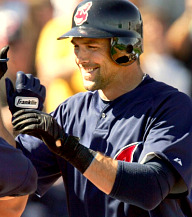 Kingman was doing dual position eligibility before it was fashionable

My name is John and I regret nothing… Except for that last burrito.

When last we met, I was telling you that Ramon Castro was worth a buck and Ronny Paulino might be working in a car wash by mid-August. Only time will tell…

If you’re not getting Pujols, try to grab Gonzalez on the cheap. I think you’ll be overpaying for Howard, Berkman and Fielder, in most cases. Let me explain…

Albert Pujols (.320-35-120) – One of the few positions where there is no doubt about who is the best offensive player.

Adrian Gonzalez (.300-30-100) – The most underrated of this bunch. His HR/RBI totals have increased each of the past 3 seasons and he has hit around .279 or above in each of those years. If he brings his Petco numbers up (only .269 last season), he could challenge Howard for the #2 spot.

Lance Berkman (.310-25-95) – I’ve been waiting for Berkman to fall off for a couple of years – his HR totals have fallen three consecutive years but he’s still a solid pick. Houston’s lineup could hold down his RBI totals

Prince Fielder (.275-28-100) – People are still drafting Fielder with hopes that he will return to the 50 HR slugger he was in 2007. I think those numbers will prove to be a statistical outlier. You can count on Fielder for something in the .280-30-100 ballpark for years to come. In future drafts, he may be a steal at those numbers, but not this season.

Sleeper – James Loney (.310-18-100) – I absolutely love watching Loney hit. I’m not sure if he’ll ever be more than a 20HR guy, but he drives the ball well into the gaps and he is only 24. The Dodgers lineup could provide plenty of RBI opportunities, depending on Manny’s willingness to play and Torre’s willingness to put Loney into the #5 hole. If it all comes together for him, this could be his breakout season.

A much better crop of players than we saw in the NL East catcher rankings… However, two of my top five guys will start the season at different positions.

Adam Dunn (.240-40-100) – I expect him to gain 1B eligibility in most leagues at some point. If you need another 1B to cover for him, take a shot on a guy like James Loney or even Nick Johnson.

Carlos Delgado (.260-30-100) – People were calling for Delgado to be cut in May 2008. By the end of the year, he was on fire. He’s still got some pop, but he’s old and he has lost batspeed. He could end up outperforming Ryan Howard or falling out of the top 5 in the NL East… I think his HR/RBI numbers will be fine, somewhere between ’07 and ’08. Get him if he falls on draft day.

Jorge Cantu (.275-25-90) – Another guy who should wind up playing 1B before too long. I’m not sold on him repeating last season’s numbers – and those numbers don’t make him a good choice at 1B, but if you get him late he could end up being a nice reserve player with dual position eligibility.

Sleeper: Nick Johnson (.280-10-65) – If Johnson stays healthy (unlikely), he could have a nice season, but he’s hardly worth considering in anything other than a deep NL-only league. He plays the game the right way and that should count for something, but it doesn’t. Oh well.