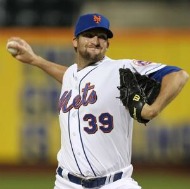 A few weeks ago we discussed Bobby Parnell as question #3 in Mets spring training. The question was whether the fireballing righthander would take a step forward as a MLB pitcher — i.e., evolve into a bonafide setup man (or, dare I say, closer?) — or has he reached his ceiling?

I would like to believe there is more effectiveness trapped inside Bobby Parnell‘s right arm, and he need only focus on a few things to raise his game to a new level. In fact, three things:

With 17 days until pitchers and Molinas report, question #17 for Mets spring training is this: will Bobby Parnell show any sign of taking a step forward in 2012?

Like the last analysis, we have a very small sample size with which to make an evaluation on Josh Stinson. And like Chris Schwinden, Stinson was pitching at the end of a long season — for all we know, his unimpressive performance could have been due to fatigue. But, we’ll give it a go.