Chief operating officer Jeff Wilpon said the decision was essentially made from an ownership perspective the instant Wright signed an eight-year, $138 million contract in early December. Wright, though, said he wanted the endorsement of teammates before accepting the honor.

Wright said it was a joint decision not to place a “C” on his jersey, since it’s not his personality and a standard uniform is sacred.

You could see this coming a mile away, and it’s just a formality – David Wright is the leader of this team.  Incidentally, I’m glad they’re keeping the “C” off the jersey.  That always looked weird on a baseball uniform. 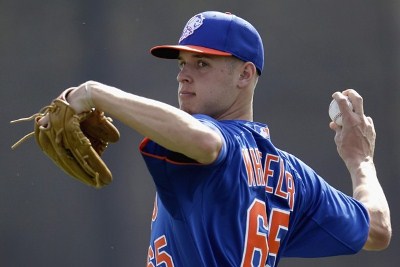 Spring Training is always the time of year when every team feels they have a chance.  Fans of each team concentrate on their strengths, and say, “hey, maybe this is our year.”  As a Mets fan, I begin to get those thoughts once again, and then think, “Naaah.”  It would probably take a miracle that would make the ’69 Mets look like the surest bet in the history of sports.

OK, maybe that’s hyperbole – but it certainly feels that way.  That’s not to say there aren’t positives to look forward to this year.

Watching the progression of Matt Harvey and Zack Wheeler is something to genuinely get excited about.  Finding out if Travis d’Arnaud is truly the catcher of the future is worth watching.  And of course, we can always wait for the next nutty statement by Fred Wilpon.

Don’t forget this year’s promotions, which include “Bark in the Park” and something called “Stitch N Pitch.”  There ARE some cool bobbleheads being offered this year, though.

As for their on-field performance, it’s easy to be pessimistic, but with the Yankees aging, maybe they can begin to win back New York with their youth movement, even if they don’t win the division.

If nothing else, we can all rest easy knowing that Jenrry Mejia is who he says he is.  That’s not a surprise – if you were to make up a name, would you choose “Jenrry?”

And baseball is closer than you think.  The Mets will play the Nationals this Saturday, and it will be televised on the MLB Network.  That’s definitely something to look forward to.

In case you haven’t been near the Hot Stove since yesterday afternoon, the Braves have signed B.J. Upton to a five-year, $75M contract. Suddenly, it feels like 1977 all over again.

So, the offseason of David Wright and R.A. Dickey is underway, and in full force.  According to Metsblog, the Mets will begin negotiations with Wright by offering him a deal that will keep him around until 2020.  I agree with Matt Cerrone’s take on what the offer will look like.  Most likely, 2020 will be an option, and it will be heavily negotiated.

Read the recent posts here on Mets Today for opinions on whether this is a good thing or a bad thing.  My thought is that 2013 is going to be like the last 2 seasons: 70-75 wins, and the Mets will remain rather stagnant on the trade/free agent market.  Johan Santana and Jason Bay will come off the ledger following 2013.  That means the Mets will be more flexible to spend heading into the 2014 season.  I believe the offseason between 2013 and 2014 is the front office’s focus.  In addition to whomever they acquire that offseason, they will still want David Wright to anchor third base.

Things seem to be happening quickly this offseason, so keep checking up on the drama here on Mets Today.

Off the heels of the recent news that Sandy Alderson will “move quickly” on extensions for R.A. Dickey and David Wright, I’ve received a flood of email from the teeming millions (OK, maybe not “millions;” more like, “dozens”). People are on both sides of the fence — a good mix of those supporting and against the plan for extending the two highest-performing Mets.

Here is an email from one side of the fence:

I just read about the Mets planning to extend David Wright…if the Mets do, it will be their biggest mistake.

Wright completely disappeared in the 2nd half and his hitting had been pathetic … I do not want him back with the Mets and it is time for the Mets to deal him to another team (throw in Mike Pelfrey and closer Frank Francisco for proven veterans who will be able to help the Mets … Wright has been a damn joke and I am sick and tired of him.

The Mets had gone through another tiresome collapse and I just want to puke … it’s time to end all this nonsense and start building the team from inside out … if it means a couple more years before they can reach postseason status, I am all for it … Wright is garbage and he belongs in the dumpster!

Jay, thank you for your email. Though you did not ask for my response, I’ll post it here anyway.

See guys, the Mets ARE playing in October, amirite?

Just two more games to go, and lucky for us, R.A. Dickey is pitching in one of them.  Tonight, Dickey goes for win number 21.  Furthermore, a good performance would cement his case for the Cy Young award.

Let’s see what the Blogs are talking about:

Thanks for reading Mets Today all season long, and keep checking us out for coverage of what will surely be  an interesting offseason.

It took five and a half months, but the Mets finally gave their hometown fans something to cheer about.