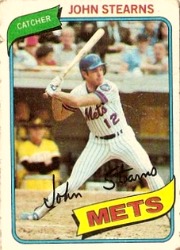 Stearns, in fact, was a tremendous athlete and a tough S.O.B. After leading the country in homeruns, he was the second overall pick by the Phillies in the 1973 draft (right behind high school phenom hurler David Clyde) and was also a 17th-round pick of the Buffalo Bills (he played in four bowl games as a defensive back for Colorado). Interestingly, Stearns was picked ahead of Dave Winfield in both of those drafts … crazy, right? As “Bad Dude”, the tough-as-nails Stearns was an appropriate heir to “red ass” Jerry Grote’s throne behind home plate. Luckily for the Mets, Stearns was nearly as good as Grote defensively and light years more productive on offense. A notoriously strong starter, Stearns made the NL All-Star team four times from 1977-1982, but often ran out of gas in second halves due to nagging injuries from his hard play catching up with him. It seemed like every year, Stearns was on pace to hit between .310-.320, lash about 40 doubles, and steal 30 bases, but he’d wear down quickly in late July, see his production drop dramatically, and inevitably suffer a major injury that ended his season. His entire career was one of those sad, “…if only …” stories.

How good was John Stearns? Consider that in 1978, he hit 15 HRs and stole 25 bases — the latter number setting a MLB record for catchers. The 15-HR number doesn’t seem so special if you weren’t “there”, but consider that only 32 players hit 15 or more homers that year (in contrast, more than double that amount of players hit 15 or more HRs in 2010) … it was kind of a big deal for a catcher not named Ted Simmons, Johnny Bench, or Gary Carter to hit more than 10. Also, consider that Stearns tied for the team lead in homers with 12 in 1977. TWELVE. The game was much different back then, folks.

In addition to the numbers he put up, Stearns was the Mets’ version of Dave Schultz — i.e., an “enforcer” who took no crap from anyone, and gave the team a level of respect and protection. There was the aforementioned, and insane, pursuit of Noc-A-Homa, but that was the tip of the iceberg. One incident I remember in particular was his clothesline tag of Dave Parker — who at the time was perceived to be one of the meanest, nastiest, and largest beasts in the NL at the time. Parker — who at 6’5″ 235 Lbs. was considered a giant back then — was plowing down catchers at a record rate in the first half of 1978. I remember this distinctly because nearly every Saturday I’d see him flatten a backstop as a feature highlight on “This Week In Baseball”; he was becoming known as some kind of monster that devoured catchers. That is, until one night in late June in Pittsburgh. In an unusually (for ’78) dramatic game, the Mets came back from a 3-1 deficit by scoring 5 runs in the final two innings, going ahead 6-3. Sometime closer Dale Murray held the fort in the 7th and 8th, but the Pirates rallied back with two runs in the 9th — thanks to Parker’s third hit of the game, a one-out triple that chased Frank Taveras and Omar Moreno to home. Bill Robinson followed with a fly ball to medium right field, and Parker tagged as Elliot Maddox caught the ball and threw home. As the ball came in, Parker looked to continue his demolition of NL backstops, but the comparatively diminutive 6’0″, 185-lb. “Bad Dude” stayed in front of the plate, slapped him in the face with the ball in his mitt, and the game was over. In the end, the Mets won 6-5 and “Cobra” wound up with a fractured cheekbone that knocked him out of action for over two weeks; he returned wearing a football facemask type of thingy on his helmet — and wasn’t quite as aggressive going into home plate the rest of the year.

Ironically, less than a year later, Maddox also threw out Gary Carter at home plate in another memorable collision that ended up with Stearns rolling around with “The Kid” as the two catchers pummeled each other on the ground. In 1980, Stearns helped the cops “secure” a couple of drunks on the field by tackling one of them, and later in the year tackled Expos hurler Bill Gullickson after the rookie buzzed one high and in to Mike Jorgensen.

No doubt, John Stearns lived up to his nickname, and had he only been able to stay healthy, might’ve been the best Mets catcher not named Mike Piazza.

What Met do you most closely associate with #12? Ron Darling? Jeff Kent? Roberto Alomar? Ken Boswell? Willie Randolph? Jorge Fabregas? Someone else? Share your memories in the comments.