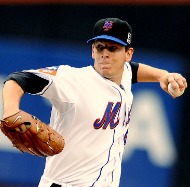 Do the ailing and injured New York Mets need to bring in outside reinforcements? If so, a few have become available. One by one:

The righthanded pitcher was waived by the Rangers after a miserable 3-inning, 7-ER start against the Yankees. He’s 3-3 with a 5.97 ERA and a 1.52 WHIP through 9 games and 53 innings.

He must be really bad, if the Rangers are willing to eat his $12M contract to get him off the roster; few teams will be willing to take on the $8M he’s owed between now and the end of the season.

But, he has shown signs of effectiveness — for example the three starts prior to the Yankees massacre, in which he pitched 23 innings and gave up only 12 hits and 4 earned runs. Think about that — in his last four starts, he’s pitched eight innings twice and seven innings once.

Though he hasn’t allowed a ton of homeruns — 4 total, and none in his last 5 starts — he does give up a large number of fly balls, something unusual for a sinker-slider pitcher such as himself. In his 8-inning win over the Angels two weeks ago, he allowed 21 airballs. Strangely enough, he’s had one game in which he induced 14 ground balls (also an 8-inning victory).

A move to the NL and a spacious ballpark could be a good thing for Padilla. But, he’s an eternal enigma, often beating himself and crumbling in the face of adversity (see: Oliver Perez). Additionally, he’s been fighting a shoulder issue for the past month. Is he worth the headache? Tim Redding’s next start may provide the answer, though I might prefer seeing Nelson Figueroa on the roster.

Oh how quickly and how far mighty talents can fall. It wasn’t so long ago that Betemit was a phenom in the Atlanta organization, a sure-handed, switch-hitting shortstop with corner-infield power. A few years and four organizations later, he finds himself DFA’d by the White Sox, dragging with him a .200 average in 50 at-bats.

Is he worth picking up? If this were two weeks ago, when Jose Reyes first went on the DL? Probably. One week ago, when the Mets were scrambling to find someone better than Ramon Martinez to play SS? Definitely. Now, with Alex Cora back, Wilson Valdez playing well, and Martinez on the DL? Absolutely.

Here’s why: Betemit is a natural shortstop who can play all four infield positions and both outfield corners. He hits from both sides of the plate, and shown a bit of power in the past. He’s 27 years old. Need I go on?

The negative is that he swings and misses — a lot. Last year he struck out 56 times and took only 6 walks in 204 plate appearances. So you can compare him to Billy Hall — a super utilityman with a little pop and a lot of whiffs. I still like him better than some of the other 25th-man options that we’ve seen thus far.

We discussed this yesterday. On paper, he might be worth a try, and the Wilpons love him. I don’t think the fans can stomach his return, however.

15 walks and a 7.79 ERA through 17 innings was too much for Milwaukee to handle. Rick Peterson’s tight leash made him almost valuable as a one-inning guy, but I don’t think he’d flourish in the Dan Warthen era. He still throws in the upper 90s, so someone will take a chance. No thanks.

Who is Pat Misch, you ask? He’s a crafty lefthanded reliever most recently employed by the San Francisco Giants. He’s not particularly good — a career 5.20 ERA through 97 MLB IP (and double that this year) — but he’s slightly more effective vs. LH hitters than righties. As long as Ken Takahashi continues to struggle against lefthanded hitters, the Mets need to at least take a glance at any and every southpaw on the market. Maybe he’s worth giving a look-see in AAA. 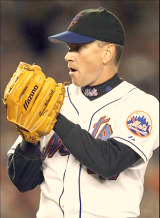