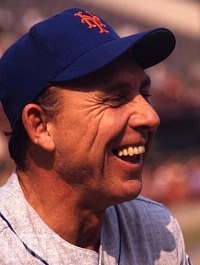 With 14 Days Until Pitchers And Catchers Report, we honor #14 Gil Hodges.

This was easy, since only three people in Mets history ever wore #14 on their back — Hodges, Ron Swoboda (for one season) and Ken Boyer (for two seasons).

Unfortunately for me, I never knew/saw Hodges while he was alive, and can only comment on what I’ve read in books and seen of him in the old newsreels. From everything I’ve gathered, he was an incredible human being, tremendous leader, and highly intelligent, innovative baseball man. For example, I’m pretty sure he is the one responsible for instituting throwing programs and counting (not the same as limiting) pitches in the Mets organization — though I can’t find any hard evidence to corroborate (where was Al Gore and his interweb idea in the 1960s?). I’ve also read and heard from many sources that Hodges was beloved in Brooklyn, and never once booed there. And of course we can thank Hodges for protecting our country while he served in the USMC during World War II. Me, I accept him immediately for the fact he began his pro career as a catcher — moving to first base only because some guy named Campanella was a little better behind the dish. Oh, and then there is that part of his life where he guided the 1969 “Miracle Mets” to the World Championship. A favorite quote of mine was relayed by Bob Costas via Gil Hodges, Jr., in a PBS presentation of New York baseball, regarding the opening of the series. The gist of it is that Gil Jr. walked into his dad’s office, ran down a bunch of impressive statistics accumulated by Baltimore players, and asked how the heck the Mets had any chance at all to beat the Orioles, who many believed was among the greatest teams of all time. Gil’s response was, “I have a group of 25 men in that room who believe they can win this thing, and that’s all I need to know.”

Since I have no personal recollection of Gil Hodges, I hope some of you who do, can share your thoughts and memories of him in the comments.

Meantime, we have about two weeks before balls are tossed in Port St. Lucie.

Back Reactions To News That Mets Are For Sale
Next 13 DUPACR: Edgardo Alfonzo