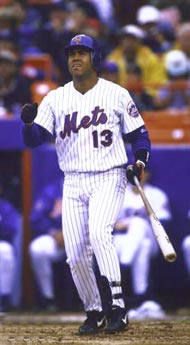 With 13 Days Until Pitchers And Catchers Report, we mark the day with former #13 Edgardo Alfonzo.

“Fonzie” was a key player for the last Met team to win the NL pennant, a quiet leader who spent his first four years as one of the best-kept secrets in baseball. By 1999, though, the secret was out, as Alfonzo exploded with 27 HR, 41 doubles, 108 RBI, and a .304 AVG. He followed that up with an even better season in 2000, hitting another 25 HR, reaching .324 AVG and posting a .967 OPS. But it wasn’t just about the offensive numbers — Fonzie did everything well. He could hit, of course, and he also ran the bases well (with speed and intelligence), played Gold-Glove defense (at two different positions), and from all accounts a good clubhouse guy during his peak years in Flushing. Other All-Stars such as Mike Piazza, Robin Ventura, and John Olerud may have overshadowed him, but for a six-year period, it could be argued that Edgardo Alfonzo was the Mets’ best all-around ballplayer.

One thing in particular about Fonzie that sticks in my memory was his “clutchness” in 1999 and 2000; it seemed that whenever the Mets needed a big hit, either he or Olerud came up with it. Of course, our memories are not always perfect, and there are people who don’t put much stock into the concept of “clutch”, so I went back to check the numbers. As it turns out, in ’99, Fonzie hit .340 with a .925 OPS in “high leverage” situations; in 2000 he was .333 / .963 in the same situations. A few more numbers from 2000: .360 AVG / 1.043 OPS with 2 outs and RISP; .357 / 1.057 in “late and close” situations; and .323/.956 in tie ballgames. The last stat is congruent with his overall performance in all situations in ’00, so from that one could suggest that Alfonzo was simply good and the situational numbers reflected that. But those other two stats in particular suggest that he stepped up his game a notch when the heat was on, and if nothing else, prove my memory was in line with the reality.

Other than Alfonzo, not too many other notable Mets wore #13; Billy Wagner was the most recent, and the only other Met to wear it for more than 3 years. The rest of the #13s includes, among others, Neil Allen, Roger Craig, Clint Hurdle, Matt Ginter, Jorge Velandia, Rodney “Crash” McCray, Rick Cerone, Jeff Musselman, Brian Daubach, and Lee Mazzilli (who wore it on his second go-around in Flushing, from ’86-’98).

What Met do you most associate with #13, and why?