There are three good reasons the Mets should not re-sign Jose Reyes:

After scoring 8 or more runs in four straight games, the Mets get blanked by a replacement pitcher who was manhandled by the Buffalo Bisons less than a week ago. Go figure … baseball is a funny game.

Mets show some mettle and come from behind to take one from the Nats.

Following with our brief series on offseason changes around the NL East, today we look at the Nationals.

The Washington Nationals certainly were busy this winter; if nothing else, the team will be different.

The big news, of course, was Jayson Werth’s 7-year, bazillion-dollar contract — which seemingly overshadowed the departures of Adam Dunn and Josh Willingham. Werth is a solid player and an offensive force, but will he make up for the exit of Dunn?

Werth will get offensive help from first baseman Adam LaRoche, who gets little respect despite posting consistent, admirable numbers year in and year out. LaRoche is no star, and tends to be a second-half hitter, but he’s reliable and will hold his own as a #5 or #6 hitter.

I’m not sure where Rick Ankiel and the other veteran bats fit into the equation, but it appears as though the Nats will have a solid, experienced bench. I’m guessing Ankiel and Hairston are insurance against Michael Morse and/or Roger Bernadina not making forward strides.

After Werth, the pitching additions are the most exciting for Washington. Tom Gorzelanny steps into a rotation that has always needed stability. Chien-Ming Wang isn’t really an “addition” since he was rehabbing with the club last year, but if he can make a comeback it could be key to Washington’s chances of climbing out of the cellar. Henry Rodriguez — acquired in the trade that sent Willingham to Oakland — is a young, hard-throwing righthander who touches triple digits and seemed to turn a corner with his control in 2010. I also like the signings of Chad Gaudin, Cla Meredith, and Todd Coffey, veteran relievers who could win spots in middle relief. Gaudin in particular is intriguing, as he once made 34 starts for the A’s and should benefit by getting out of the AL East; whether he gets the chance to break into the Nats rotation remains to be seen. Meredith also could benefit by leaving the Beast; he was a strong performer for the Padres previously, and his 2010 performance was likely impacted by bone chips that were removed from his elbow after the season.

Finally, I’m happy to see Matt Stairs still hacking. His all-or-nothing approach and flair for the dramatic as a pinch-hitter is fun to watch — as long as he’s not hitting game-ending homers against the Mets. 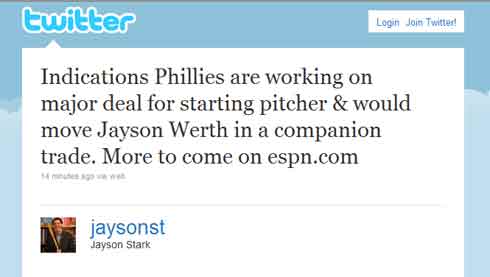 Well, maybe not FULL Wally Backman, but a quarter-Wally… or an eighth?

Just to put Werth’s frustration into context, this is from the 12th inning of last night’s game.

A young child may have been scarred for life last night after his father, who was in perfect position to catch a foul ball, didn’t yield to the advances of mountain man Jayson Werth as he also attempted to catch the fly. Except, you know, if Jayson Werth caught the ball it’d end up as an out instead of a memento on top of the fireplace. Unfortunately for the Phillies and the virgin ears of the foul ball catcher’s kid, the dad caught the ball and Werth unleashed a string of cuss words that would’ve sent him straight to the principal’s office. At least Werth can claim he was just trying to expand the young boy’s vocabulary. (With Leather)

My gut reaction was that a fan should ALWAYS get out of the way in a situation like this, ESPECIALLY if it would help the team he is rooting for… However, consider this:

That’s alot to be thinking about with a ball falling directly onto your head.

In case you’re wondering, the Phillies won the game in the bottom of the inning on Brian Scheidner’s walk-off home run.