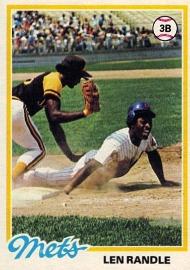 There are 11 Days Until Pitchers And Catchers Report to spring training, and today I’m honoring former #11 Lenny Randle.

To be perfectly blunt, Randle was (and still is) a nut job. But he was ours.

A switch-hitter with speed and an ability to get on base, Randle was an up-and-coming star who the Mets were able to wrangle away from the Texas Rangers for a song (actually, less than a song — futility infielder Rick Auerbach). How did the Mets steal this former #1 pick? Easy — no one else wanted him after he belted his Rangers manager Frank Lucchesi during batting practice one day and pummeled the 49-year-old to the point where he required reconstructive surgery to his face. Randle was charged with aggravated battery — that’s a felony, folks — and faced a possible prison sentence. So naturally, the Mets were only too happy to take him off the Rangers’ hands and sign him to a 5-year, $400,000 contract; then-owner M. Donald Grant even offered Lucchesi $10,000 to forget the whole matter (Lucchesi declined).

But that’s how it was for the Mets in 1977; things started bad and just got worse.

As it turned out, Randle refrained from assaulting anyone in his Flushing tenure, and for one year, performed like a borderline All-Star. Playing the outfield, second base, shortstop, and third (where he eventually settled in), Randle hit .304 with a .383 OBP, .787 OPS, 7 triples, 78 runs, and 156 hits, pacing the Mets in all of those categories (among others) in ’77. He also set a Mets record with 33 stolen bases — though, he set another Met record by being thrown out 21 times. And, he grounded into 15 double plays to tie for the team lead — strange for a speedster, but you have to understand Lenny hit the ball on the ground just about all the time.

Unfortunately for the Mets, Randle was something of a one-hit wonder; he followed up his big ’77 season by hitting only .233 in ’78. The saberheads will point out that in ’77, he had an unusually high .343 BABIP and an unusually low .262 BABIP in ’78 — so in other words, he was very lucky one year and very unlucky the following year. Maybe … but, he also stunk. Pitchers and defenses didn’t know him in ’77 — his offensive style was not unlike that of Luis Castillo — and in ’78 teams adjusted to his bloops and seeing-eye grounders by attacking him with more hard and high stuff and positioning defenders accordingly. Randle didn’t adjust to the adjustments, and didn’t hit the ball with as much authority as he did previously. In ’79, Richie Hebner was brought in to play 3B, and so Randle didn’t make the team out of spring training in ’79 and was released, with the Mets eating the last three years of his deal. In a disturbingly inappropriate move, Randle was purchased from the Pirates by the Yankees on August 3rd — taking the roster spot of Thurman Munson, who died in a plane crash the day before. Ugh. Randle played a few more years in MLB as a utility man before becoming the first American to play pro ball in Italy in the early 80s — and hit .477 one year. Ironically, he also was a slugger in Italy, setting records for most homeruns and longest homeruns.

I have to admit, Randle wasn’t my favorite #11, but he is the one I immediately think of in that uniform number — mainly because he was crazy but also because he was their offensive star in an otherwise dark 1977. Other players who wore #11 for the Mets include — among others — Tim Teufel, Frank Taveras, Tom Veryzer, Wayne Garrett, Garry Templeton, Kelvin Chapman, Roy McMillan, Dick Schofield, Vince Coleman, Jason Tyner, Ramon Castro, and Joe McEwing (after Super Joe gave up #47 to Tom Glavine).

What memories do you have of a former #11? Share your thoughts below.