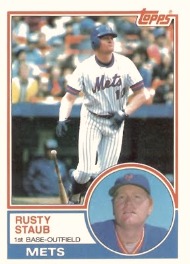 Some of you may be saying, “Joe, Rusty wore #4!”. He did, it’s true. And in fact, his best years as a Met occurred when he wore a single digit. But I was fairly young when Rusty was singlehandedly hitting the Mets into the postseason in ’73 and was their main run producer in the early part of that decade; my most vivid memory of him was in his second go-around, as pinch-hitter extraordinaire.

Seeing Rusty in his later years, when he was almost exclusively used as a pinch-hitter — and choking up exactly one-hand high — was a special treat. Not sure about you, but for me, when the truly great hitters of the game are in their final years (people like Don Mattingly, George Brett, Tony Gwynn, Wade Boggs, and Pete Rose immediately come to mind), my eyes are glued to the screen when they come to bat, because I know I won’t be seeing much more of them (and maybe I’ll learn something). This is the way I saw Rusty Staub in his final years with the Mets: he demanded every bit of my undivided attention. Maybe his career numbers weren’t HOF-worthy, but he was an absolute professional in the batter’s box – smart, attentive, focused, and with a plan. His bat speed was nowhere near what it once was and his power was sapped, but he used his guile and savvy to beat the pitcher every once in a while – not unlike a crafty veteran hurler does once his fastball is gone. Rusty read pitchers like a book, and was one of the best at stealing signs and picking up on cues that “tipped” pitches. By the time he was in his 40s, he relied almost exclusively on these abilities, and was something of a “guess hitter”; though, he was an “educated guess hitter”. He also took cuts according to the situation; if all that was needed was a single, his swing would be more measured and geared to contact; if a sac fly was ncecessary, he’d take a slight uppercut and look for a pitch he could lift; if a homerun was needed, he would try to work the pitcher into a situation where he could guess fastball and time it just right, or work him into a curveball situation and hope for a hanger. He didn’t always come through, but when he did, it was earned.

I have many fond memories of Rusty, both on the field and off. My career in the wine business crossed paths with his (first as a restaurateur, later when he was a winery owner), and thus I had the pleasure of his company many times. He sat with me for dinner at his old restaurant (Rusty’s on 5th) on one occasion, and I returned the favor a few years later after a wine tasting event. Every time I saw him he was a complete gentleman — an absolute class act — and never tired of talking baseball. On the field, there is one unusual night in particular that I remember, I think it was in his last season as a Met. I was at a tie ballgame at Shea when Rusty made one of his pinch-hitting appearances, and somehow wound up in left field in the following inning — a fairly rare occurrence, considering Rusty’s girth and inability to move quickly toward baseballs in flight in those later years. After the first batter — a lefthanded hitter — was retired, I looked out to the outfield and saw Rusty jogging across the pasture to switch places with the right fielder, as a righthanded batter was due up next. By the time Rusty made it over to right, a pinch-hitter was announced — a lefthanded hitter, of course. Before the first pitch was thrown, Rusty and the other corner outfielder switched places again. Watching Rusty huff and puff, lugging his portly frame 150-200 feet across the green grass was bizarre, and mildly comedic. When he finally made it back to left field — just in a nick of time and before the pitch was thrown, the crowd erupted with a loud ovation. The sudden noise seemed to distract the hitter, who was late on the pitch and blooped it out to left — directly toward the seemingly exhausted Staub. Rusty raced in and caught the ball just as it dropped toward his shoetops, and the fans went nuts, giving him a brief standing ovation. Good times.

What #10 do you best remember? Hot Rod Kanehl? Dave Magadan? Rey Ordonez? Endy Chavez? Someone else? Post your memories in the comments.