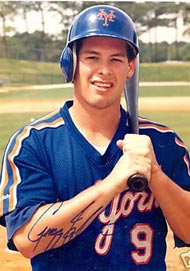 With 9 Days Until Pitchers And Catchers Report, the focus is on former wunderkind Gregg Jefferies.

Jefferies was supposed to be the next Pete Rose — and the greatest offensive player ever produced by the Mets farm system, next to Darryl Strawberry. In spring training of 1998, and almost six months before he was added to the 25-man roster in 1988, Sports Illustrated ran a feature story on Jefferies, detailing his unusual work regimen and status as “arguably the best baseball player not on a Major League roster”. Within days of the SI issue’s release, high school boys throughout the country were marking up colored tennis balls and swinging bats underwater (including yours truly). Heck, I even remember a portly, much-too-hairy, middle-aged softball player who worked security at my college dragging a bat through the indoor pool.

And why wouldn’t we? After all, here was one quote from that article:

Some experts are already comparing Jefferies’s skills to those of Mickey Mantle, Pete Rose, Joe Morgan and Wade Boggs. Like Mantle, Gregg, who’s 5’10” and 175 pounds, is a switch-hitter with mirror-image swings from both sides of the plate. Like Rose, he’s highly aggressive; like Morgan, a smart, challenging base runner; and like Boggs, an immensely talented all-fields hitter. He’s so effective at the plate, in fact, that three times umpires have confiscated his custom-made black SSK bats at the behest of rival managers who thought, erroneously, that the bats were doctored.

Mickey Mantle? Wade Boggs? Fire another tennis ball at me — I’ll tell you what number is on it.

Without question, Jefferies was — at the time — the most-hyped prospect in Mets history. And at first, he lived up to the hype, hitting .321 with a .961 OPS, 6 HR, and 17 RBI in only 29 games at the end of the season — a season in which the Mets finished in first place, with 100 wins, but were stunned in the NLCS by a hot Dodgers club. I remember thinking, “wow, the Mets have tons of great young pitching, they’ve been to the NLCS twice in three years, and now they have this superstar hitter who isn’t even old enough to drink; the Mets have a dynasty and are going to go to the World Series all the time!”

Ironically, it was the arrival of Jefferies that was one of the key motions that destroyed, rather than fostered, a Mets dynasty. The destruction, of course, began right after the ’86 World Series, when the Mets sent Kevin Mitchell to San Diego for Kevin McReynolds, but the momentum built significantly after the team decided to “create a position” for Jefferies in 1989 — which, in turn, displaced Wally Backman, but more importantly, did not sit well with the veterans on the club, who saw Jefferies as a brat with a silver spoon placed in his his mouth. It was a tough first season for the 21-year-old, as he hit only .258 and was constantly tormented by the older Met players. He improved in 1990 — as the Mets began to regress — but then took a giant step backward in ’91 and was traded the following winter (with McReynolds and Keith Miller) for Bret Saberhagen and Bill Pecota.

Eventually, Jefferies did put up impressive numbers, but not until after he left Flushing (he hit .342 with 16 HR, 46 SBs, and only struck out 32 times in 612 PAs for St. Louis in 1993). As a Met, though, he’ll always be remembered as the kid who never came close to fulfilling the hype.

What #9 do you best remember? A few from the past include Joe Torre, Jim Hickman, Todd Hundley, Todd Zeile, Ricky Ledee, Bruce Bochy, Ty Wigginton, Mark Bradley, and J.C. Martin. Post your memories in the comments.

Back 10 DUPACR: Rusty Staub
Next When Should the Mets Trade Jose Reyes?