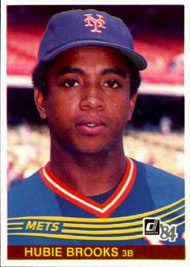 With 7 Days Until Pitchers And Catchers Report, I select former #7 Hubie Brooks to represent the day.

I’m certain that many of you are wondering why it wasn’t Eddie Kranepool. I’ll tell you why: because to me, Hubie Brooks always represented optimism, and Kranepool represented pessimism.

The fact that Ed Kranepool led the Mets in so many career categories was a testament to how bad the Mets were in their first 20 years of existence. If he had been property of any other franchise in MLB, Kranepool’s career would have lasted less than five years. But because the Mets were absolutely awful, and because Joan Payson had a creepy, illogical preference to keep Eddie under contract, he was able to spend 18 seasons as a mediocre big leaguer. OK, there was that stretch toward the end when he was a masterful pinch-hitter — albeit for a last-place team — and there was the 1971 season, when he was an adequate offensive player, but overall, Ed Kranepool symbolized the futility of the Mets franchise.

In contrast, Hubie Brooks symbolized the hope of what the Mets could be, and what they would eventually become, in the 1980s. Ironically, the team needed to part with Brooks in order to realize their destiny — he was the key player going to Montreal in the trade for Gary Carter — but still in all, Hubie equaled hope for we frustrated fans in the early 80s.

A first-round pick out of Arizona State in 1978, Hubie was the first home-grown position player to show any kind of potential in a long, long time — maybe the first ever (you can’t count Mike Vail, can you?). Looking back at his numbers, he doesn’t look all that impressive in his first few years, but trust me, you had to be there to “get it” — this was a team, remember, whose homerun leader often put 15 or less balls over the fence. If you lived through the years of Frank Taveras, Doug Flynn, and Roy Staiger, then you know where I’m coming from; Brooks was a star in comparison.

As it turned out, Hubie’s time in New York was mostly marked by unfulfilled potential — though we never saw it that way. Rather, we saw him as a kid who probably still belonged in the minors, but was up in the bigs cutting his teeth, and would eventually be a perennial All-Star. Brooks did eventually become a decent ballplayer, but it happened with the Expos and Dodgers … and by the time he returned to Flushing, he was already on the downside of his career. Again, the irony: his best years were bookended by his Mets years.

So that’s it — Hubie’s my man for #7. You are free to disagree and suggest your own representative. Please do so in the comments, and provide some reasoning and/or memory to support your selection.

We have a week to go, folks … giddyup!

Back 8 DUPACR: The Kid
Next Would You Trade for Michael Young?