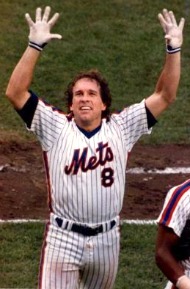 With 8 Days Until Pitchers And Catchers Report, we honor “The Kid”, Gary Carter.

Before the PEDs era of Todd Hundley and Mike Piazza arrived, Carter was the best offensive catcher ever to wear a Mets uniform — and some might argue he remains the best all-around catcher in the team’s history. He hit for a decent average, he got on base, he hit for power, he hit in the clutch, he ran the bases intelligently, he called a great game, he threw out runners, he played strong defense, and he took charge on defense. In short, he did everything a catcher was asked to do, and then some; that’s why he was elected to the Baseball Hall of Fame.

But all of these skills are not necessarily the reason I chose Gary Carter to honor this day. In fact, his all-around performance are only the third reason his image is forever burned in my memory.

Coming in a close second was seeing his stiff, rusty-gate swing that produced a line-drive two-out single in Game Six — the one that started THE rally that eventually led to a slow grounder skipping through Bill Buckner’s legs on a cool autumn evening in Flushing in October, 1986. Besides the drama of the hit, there was an appreciation for the execution: down two runs with two outs in the bottom of the tenth of an elimination game, the power-hitting Carter clearly cut down his normal swing and focused on contact. He knew he couldn’t hit a three-run homer with the bases empty, so the best thing he could do was find a way to get on base. In other words, an example of selfless, tenacious, winning baseball. Despite his insatiable desire to have his face in front of the camera, Gary Carter was first a team player and a winning ballplayer.

Still, though, there is another moment in time that marks Gary Carter’s time with the Mets more than any other (for me) — and it happened before he put #8 on his back.

The day was December 10, 1984. The Mets had just come off a surprisingly strong season, giving the Cubs a run for their money into the final weeks of September — they even sat in first place as late as July 31. Darryl Strawberry and Keith Hernandez led the offense, and Dwight Gooden came out of nowhere to lead a stable of young arms that also seemingly came out of nowhere. For the first time in about 10 years, the Mets weren’t awful. For the first time in a decade, we didn’t expect the Mets to finish last. Their ascent from the NL East basement was sudden and signifcant: they went from the most disrespected losers in the league to potential pennant contender in a little over a year. Finally, we Mets fans could see the light at the end of the tunnel — and it was a short tunnel.

In other words, the team was “one player away”, and some how, some way, GM Frank Cashen wrangled Gary Carter away from the Expos. Back then, there was no internet to report rumors of trades weeks and months before they occur. There wasn’t an MLBTradeRumors to feed our hourly obsession with what players are on the block. There weren’t any Mets blogs dissecting the team and making recommendations on who should be brought in on a daily basis. ESPN didn’t even cover baseball all that much in the early 1980s; we put that channel on to watch the Montreal Alouettes of the CFL, curling, and Australian Rules Football. And if you were like me and lived in the NJ suburbs, you probably didn’t even get to read the baseball banter between the Post and the Daily News; the extent of baseball news reported in our crappy local papers came via the Associated Press (occasionally UPI) and were stated in an obscure little corner of page 2, titled “Transactions”. So when it was announced on the 11 o’clock news (at 11:25 PM, because the sports came on just before the weather) that Gary Carter was acquired by the Mets, it was stunning. I was at my best friend Tim’s house that evening — we were playing Intellivision instead of studying, and stuffing our faces with the soggy chicken McNuggets that his older brother Mike brought home after finishing up his job at McDonald’s — and we went nuts after Warner Wolf expressed words that didn’t seem possible: Gary Carter is going to be a Met. Euphoria took over immediately, because this acquisition meant the Mets were going to go to the World Series — and win it. We shouted at each other, we jumped up and down, we doubled high-fived; it was like we had already won the World Series. Because, with Carter on the team, there was no doubt: it was going to happen, and it might happen as soon as 1985. We knew that the Mets were just one little piece away from taking over the NL East, but instead of a “little” piece, and Cashen got a huge piece — a bonafide superstar at the top of his game. It was implausible; how did he pull off such a heist?

Then the words “Hubie Brooks” dripped from Warner Wolf’s lips. Oh. For a brief moment, Tim and I were sad, as Hubie was one of our favorites — a home-grown All-Star. Could the Mets still contend without Hubie? Who would play shortstop?

Fried clams ran through my head.

“He’s a third baseman from the Tigers. He’s awesome.”

“When did they get him?”

“Over the weekend, I think”

“He’s better than Hubie Brooks … trust me,” Mike said as he put an Expos helmet on his head and we smacked high-fives. (Yes, he actually had an Expos helmet — he was a fan of Gary Carter long before the Kid came to Flushing.)

“But can he play shortstop?”

And so it went. We continued to stuff our pimpled faces with greasy McNuggets until our bellies ached, while discussing how the Mets would dominate the world in 1985 — because the Mets had Gary Carter. And Strawberry. And Keith. And Dwight. And Ron Darling. And Wally Backman. And Mookie. We knew, right then and there, on that Monday December evening, the Mets were finally the team to beat.

Of course, there were other Mets who wore #8 — several of them catchers, in fact. Chris Cannizzaro, John Gibbons, Ronn Reynolds, Yogi Berra, and Rick Sweet, for example. And then there was Phil Mankowski, Carlos Baerga, Dan Norman, Dave Gallagher, and Desi Relaford. Which player do you most associate with #8, and why?

Back When Should the Mets Trade Jose Reyes?
Next 7 DUPACR: Hubie Brooks