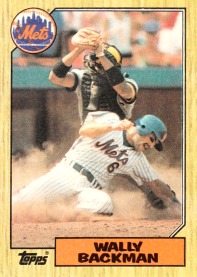 With 6 Days Until Pitchers And Catchers Report, I chose former #6 Wally Backman to represent the day.

Are you surprised? If so then you don’t come by here often.

Wally — like many of the ’86 Mets — was considered an “old-school” player in the 1980s … which means, in today’s game, he’d be REALLY old-school … in fact I’m not even sure that schools existed in cro-magnon times.

25-30 years ago, old school meant hustling all the time; getting the uniform dirty by sliding head-first and diving for balls; taking out the pivot man on a double play as a rule; leaning into a pitch to get on base; stealing signs; barreling the catcher; playing with injuries; and doing everything else (without cheating) to win a ballgame. This may sound similar to what “old school” means today, but there is one more factor that you rarely, if ever, see from today’s old-schooler: hatred for the opponent. There was no fraternizing back then — not before games, not during games. OK, there was an occasional chatty first baseman, but for the most part, opponents genuinely hated each other. And in 1986, NL teams genuinely hated the Mets — and vice-versa. Three players in particular — Wally Backman, Ray Knight, and Lenny Dykstra — epitomized the “old school” way, and despite not being the most gifted or highest-profile players, were driving forces of the character of the last Mets World Championship club.

There are many things I remember vividly about Wally, beginning with his distinctive, squatting batting stance. He did everything he had to do to get on base, be it by hit, by getting hit, by walking, or, my favorite, via a drag bunt. His drag bunting from the left side was spectacular; he would push it hard past the pitcher, but too far away from the first baseman and more or less at the second baseman, who was usually playing too far back to field the ball in time. Both Backman and Mookie Wilson turned that execution into an art form, and seemed to always get a hit as a result. To this day I don’t understand why the Mets haven’t sent Jose Reyes to work with Wally and/or Mookie during spring training to learn how to bunt like this; Reyes might hit .350 if he bunted for a hit more often.

Of course I remember Wally’s hard-nosed play and passion on the field. Though, one other incident that sticks with me was off the field: his run-in with Darryl Strawberry in 1987. For years, Straw was chronically late for games and/or would beg out after partying too much the evening before. The Straw that broke the camel’s back came in early July ’87, when Darryl recorded a rap song on a Monday night, then came up “ill” on Tuesday night before an important game against the Cardinals. He sat out that game and the next for “low-grade fever and headache”; his teammates translated that to mean, “I don’t want to face the Cards’ two tough lefty starters Joe Magrane and Mike Mathews”. Lee Mazzilli and Wally Backman called out Darryl in the press, with Backman saying, “From the stuff I heard from the trainer’s room, Straw should’ve been out there. Nobody in the world that I know of gets sick 25 times a year.” This prompted the 6’6″ Strawberry to respond, “I’ll bust that little redneck in the face”. When reporters relayed that to the 5’8″ Backman, Wally said, “If that’s the case, do you think I’m going to back down?”. Gotta love it.

There were many, many others to wear #6, so I’m sure you have your own choice to represent this day. Just a few of them: Jose Cardenal, Al Weis, Mike Vail, Alex Trevino, Daryl Boston, Joe Orsulak, Melvin Mora, Timo Perez, Mike DiFelice, Ruben Gotay. What #6 do you remember most and why? Share your memories in the comments.

We have less than a week, folks!

Back Would You Trade for Michael Young?
Next Is Wilmer Flores the Rodney Dangerfield of Prospects?