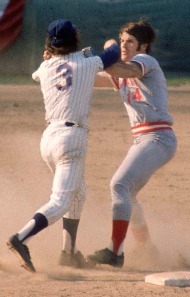 With 3 Days Until Pitchers And Catchers Report, we offer a cool, refreshing Bud — Bud Harrelson, that is.

Derrel McKinley Harrelson was signed by the Mets in 1963 (there was no draft until 1965), and made such an impression on manager Casey Stengel that “The Ol’ Perfessor” lobbied to bring him north with the big club after spring training in 1964. Not surprising, considering the Mets were awful back then and Stengel always favored little guys with spunk, brains, and the ability to execute fundamentals (see: Billy Martin, Phil Rizzuto). In fact it was Stengel who, seeing Harrelson struggle with his hitting, suggest he try switch-hitting in 1965. The move paid off, as it helped him reach the big leagues quickly and it allowed him to be one of only 4 players penciled into the Gil Hodges’ platoon lineup on an everyday basis in 1969.

I had to live with the fact that I wasn’t going to be a hero hitting those home runs. I’m not a home-run hitter, I’m not a .300 hitter and I’m not going to make $125,000 a year. All I’m supposed to do on offense is get on base and score a run. I may not be as much of a hero to the fans, but I’m just as much of a hero to the club. I have to take advantage of what I am. I am Bud Harrelson, contact hitter, who has to hit the ball on the ground. If I try to hit a fly ball, I’m thinking wrong.

Looking at the numbers, Harrelson wasn’t much of a hitter. But you have to understand the era; generally speaking, a shortstop’s primary focus back then was to play defense, and any offense at all was a bonus. And though he provided no power (7 HRs in his 16-year career) and a low batting average, he often posted a surprisingly high OBP (for example, he hit only .227 but put up a .366 OBP in 1974). Additionally, he was an outstanding bunter, good situational hitter, and was an above-average baserunner.

Of course, Harrelson was known not for what he did with the bat, but for what he did with the glove. His defense was steady and flawless if unspectacular — the type of fielder who is better appreciated when seen every day rather than on a highlight reel. That’s not to say he didn’t make great plays — he did — but his real value was his day-to-day consistency. A good example was the 54 games he played without making an error in 1970 — also the first time he was named to the All-Star team and the year before he won his only Gold Glove.

As with many of the players in this countdown, Bud was known for being a scrappy, hard-nosed ballplayer with a fiery personality. Every Mets fan (even those who weren’t around to see it live, thanks to rain-delay highlight films) remembers seeing “Twiggy” take on Pete Rose during the 1973 NLCS.

This choice was fairly clear-cut, but there were several other Mets who have worn #3. Among them include one of my old favorites, former backup catcher Vance Wilson; Sergio Ferrer, whose name was better suited to making designer jeans; Richie Hebner, who was the most hated Met until Bobby Bo “came home”; dinosaur expert and child abuser Carl Everett; Rafael Santana; Miguel “How Is He Still in MLB” Cairo; and another of my all-time favs, Damion Easley.

Which #3 do you remember best and why? Share your memories in the comments.

Back 4 DUPACR: Ron Swoboda
Next Saturday News and Notes